A Midshipman at Notre Dame During World War II 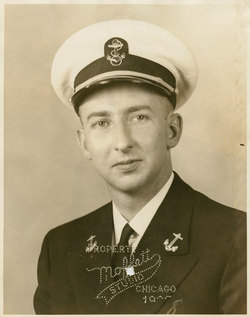 Alexander W. Williams arrived on Notre Dame’s campus in 1943 unsure of what the next several years had in store for him. He moved into a dorm filled with new faces from all around the country. And he received very specific instructions about the type and color of underwear he could wear.
Williams did not come to South Bend as a student. He was one of thousands who trained at the United States Naval Reserve Midshipmen’s School at Notre Dame during World War II. It was a unique and important chapter in Notre Dame’s history, and a recent collection of photos and documents that belonged to Williams have provided the University of Notre Dame Archives with new, first-hand evidence of what campus was like at that time.
The collection came to the University Archives thanks to the thoughtfulness of Marian Oberholtzer, Williams’ daughter. When cleaning out her late parents’ home recently, she came across a number of scrapbooks and old photographs. Oberholtzer found documents from the Midshiphmen’s School, as well as beautiful photographs of her father and his fellow Midshipmen at Notre Dame.
Oberholtzer was an only child, and she and her husband don’t have children. Unable to pass on these fascinating relics to the next generation, she set out to find them a permanent home.

“The thought of it all ending up in the garbage just kind of horrified me,” Oberholtzer explains. 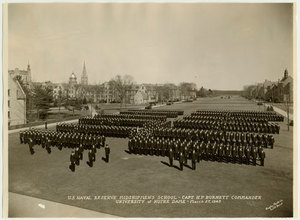 She located an eager recipient in South Bend. The Archives is charged with documenting and preserving the University’s history. A key ingredient to their collections has always been original documents, photographs, and memorabilia given to them by Notre Dame alumni, students, parents, and friends. These contributions help the Archives preserve the Notre Dame experience across generations. The collection donated by Oberholtzer lent greater detail and imagery to one of Notre Dame’s most unusual eras.

Williams grew up far from South Bend on a small dairy farm outside of Washington, D.C. Intent on going into the family business, he earned a bachelor’s degree in dairy science from Virginia Tech in 1939. He then obtained a master’s degree in the same discipline from Penn State. During his stay in Happy Valley, Williams met and fell in love with Oberholtzer’s mother. The couple wed in the summer of 1941 and moved to Birmingham, where he worked as a health inspector.
The war soon intervened. Wanting to serve his country, Williams entered the Navy in late 1942 and received instructions to report to Notre Dame in January. One of the documents Oberholtzer gave to the Archives, dated Sept. 19, 1942, outlined the program, which was divided into two parts. First, Williams would undergo approximately one month of “indoctrination.” After completing that initial phase, Williams would be appointed a Midshipman and given three additional months of instruction and practical drills in three subjects: Seamanship, Ordnance, and Navigation. The program also would include infantry drills and competitive athletics. 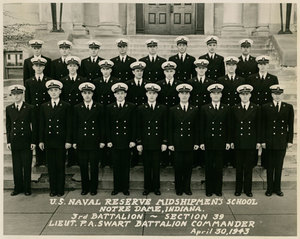 This document also spelled out exactly the types and amounts of clothing Williams should bring: 1 pair of gymnasium shoes; 2 pairs of Navy regulation black shoes, plain toe, lace (no buckles); 2 pairs of athletic shorts; 1 athletic supporter; 2 pairs of white woolen athletic socks; 6 pairs of black socks; and 2 pairs of pajamas. Williams was informed that he would be given four sets of “regulation underwear,” and that any additional underwear he wished to purchase had to be “of a regulation pattern (‘T’ shirts and white shorts).” The document also made clear exactly what Williams should not bring to South Bend, including a car and his wife.

The photographs Oberholtzer gave to the Archives underline a fact of life at Notre Dame in the mid-1940s: Campus was overrun with military men and women. Due to the war, Notre Dame’s civilian undergraduate enrollment dwindled to less 300 students, according to Thomas J. Schlereth’s book, The University of Notre Dame: A Portrait of Its History and Campus. The presence of the Navy kept campus humming during this crucial period, and Notre Dame continues to value its relationship with the Navy and the armed forces more broadly.
Williams graduated from the program on May 27, 1943. He went on to a distinguished stint of service in the Navy, ultimately taking on a crucial and dangerous assignment aboard a minesweeper in the Pacific.
After the war, Williams returned to the milk business. He carved out a successful career as a food chemist, specializing in powdered milk. He passed away in 2003, while his wife lived another 11 years before passing away last year. Throughout his life, Williams kept with him the memories and mementos from his time on Notre Dame’s campus. 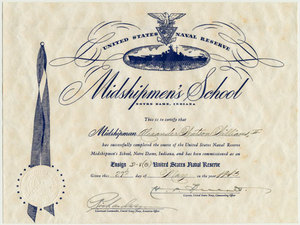 Obertholtzer is thrilled that these materials will serve a purpose at Notre Dame. “I just wanted the material to go somewhere...and just to perpetuate the record of something unique that had happened there,” she says. “This whole thing has been such a gratifying, interesting experience for someone to really be that interested in what I had sent. I just wanted it to live on.”

The staff at the Archives is just as grateful. They value contributions from alumni, students, parents, and friends, from photographic evidence of past campus life to general documentation of previous eras at Notre Dame -- even the fact that all Midshipmen in 1943 had to wear standard white underwear.
If you have materials you’d like to pass along to the Archives, please visit their website for more information on the process.