The Rise of Lay Ecclesial Ministry

Collen Mayer ’14 M.Div. had an engineering degree, an MBA, and a good, stable job as an engineer with a power company in Birmingham, Alabama. He also had a nagging feeling that he was in the wrong line of work.

“I realized that service work was really the most fulfilling part of my life,” Mayer said. “The idea that people actually do that kind of work for a living was really captivating to me.”

In his spare time, Mayer helped out at his local parish. He found himself looking forward to this volunteer work while performing his actual job. “I realized that service work was really the most fulfilling part of my life,” Mayer said. “The idea that people actually do that kind of work for a living was really captivating to me.”

Mayer left the power company and engineering behind for United Way, where he spent five years as a fundraiser. While Mayer loved United Way’s work in the community and their mission to improve the lives of those in need, he still wasn't completely fulfilled.

“I wanted my work to be more deeply grounded in faith and ministry,” he explains.

That desire brought him to Notre Dame, where he earned a Master of Divinity (M.Div.), a professional degree offered by the Graduate School and the Department of Theology. The M.Div. program offers aspiring lay ministers, as well as seminarians, a comprehensive theological education and training in ministry.

After completing his degree in May, Mayer accepted a position with Catholic Charities of Tennessee. In January, he’ll take over as Director of the organization’s Social Services Department, overseeing the agency's work with adoptions, homelessness, and child abuse. It’s the type of job Mayer had always aspired to hold.

While his specific career arc is unusual, Mayer’s story is not uncommon. He’s part of a growing group that is playing an increasingly large role in the U.S. Church -- lay ecclesial ministers. After receiving specialized academic and ministerial training, these lay individuals take on leadership roles in parishes, dioceses, Catholic schools and universities, hospitals, nonprofits, and organizations within the Church, including the U.S. Conference of Catholic Bishops (USCCB).  And Notre Dame is playing a key role in training and forming many of these new Church leaders.

Lay people have served the church for centuries, but lay ecclesial ministry is relatively new. The theology of Vatican II emphasized that by virtue of Baptism, all are called, including the laity, to serve the Church. Over the past 50 years, a significant number of lay men and women have chosen to do so professionally in full-time leadership roles. In order to effectively minister, these lay people must achieve a certain level of expertise to work alongside priests and vowed religious.

Rev. Michael Driscoll, a diocesan priest who has been teaching in Notre Dame’s M.Div. program for 21 years, says the publication of Co-Workers represented a turning point. “I think now we have more of a theological understanding of lay ecclesial ministry,” Father Driscoll says. “And it’s been professionalized, and there are certain areas of formation very similar to priestly formation.”

The U.S. Church was built on the backs of women religious and the ordained. Their hard work has influenced and inspired the lay people who now are choosing to serve the Church professionally, as well. But the evolution of the role played by the laity in the U.S. Church has coincided with a decline in the number of vowed religious. In 1990, there were roughly 52,000 priests, 103,000 sisters, and 7,000 brothers in this country, according to the Center for Applied Research in the Apostolate. By 2010, those numbers had fallen considerably across the board -- 40,000 priests, 58,000 sisters, and 5,000 brothers. Over the same time period, the number of lay ecclesial ministers has risen from 22,000 to 39,000 -- and those numbers only represent lay ecclesial ministers serving in parishes. These statistics demonstrate a rarely discussed reality for the Church: the frequently cited vocation crisis among vowed religious, while still a concern, is being offset somewhat by the robust growth of lay ecclesial ministry. 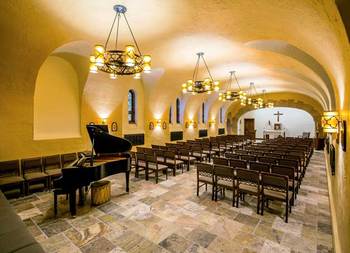 “Seventy-five years ago, the jobs we have wouldn’t have existed for lay people,” Mike Jordan Laskey ’08, ’10 M.A. explains. Jordan Laskey is the director of Life & Justice Ministries for the Diocese of Camden, New Jersey. His wife, Genevieve Jordan Laskey ’07, ’10 M.A., is a resource development specialist for Catholic Relief Services. They are qualified for these positions thanks to the education and training they received at Notre Dame.

So many programs, organizations, and initiatives at the University create an environment of faith and foster in students a desire to serve the Church. The list includes, but is not limited to, the Department of Theology, Campus Ministry, the Center for Social Concerns, the Alliance for Catholic Education, the Sacred Music program, the Joan B. Kroc Institute for International Peace Studies, dorm Masses, and the Institute for Church Life (which includes the Notre Dame Center for Liturgy, Notre Dame Vision, and STEP). But among all these and so many more, two graduate programs stand out as effective courses of study that specifically prepare students for careers in lay ecclesial ministry: M.Div. and Echo, the program from which the Jordan Laskeys graduated.

The M.Div. program is a rigorous, three-year course of study. It’s the same degree seminarians entering the Congregation of Holy Cross earn before ordination, and the seminarians and lay students take their classes together and learn alongside one another. “It models building up the Church itself, which is not simply a clerical state and not strictly a lay state, but all of us working together,” says Stacey Noem ’98, ’05 M.Div., the Director of Human and Spiritual Formation for Lay Students in the M.Div. program.

M.Div. students build a comprehensive academic foundation by studying under the world-class professors in Notre Dame’s Department of Theology. They develop ministerial skills through field study. In each of their three years, M.Div. students work in parishes, schools, hospitals, prisons, or social services agencies to gain valuable hands-on experience.

Thanks to this combination of theological and ministerial training, along with the unique experience of studying alongside seminarians, M.Div. graduates leave Notre Dame prepared to step into Church leadership across a large spectrum of ministries and collaborate easily with priests and vowed religious.

“I use the analogy of all being on the same team,” Christina Bax ’05, ’09 M.Div. says. Since finishing her degree, Bax has worked as a pastoral associate at Saint Clement Church on the north side of Chicago. Bax leads the parish’s RCIA program, teaches Baptism preparation for new parents, and oversees adult faith formation initiatives. Through it all, Bax works closely with the parish’s pastor. “We’ve got different positions or different roles, but we know how to leverage each other’s strengths and we value the part we each play.”

Echo, the other graduate program at Notre Dame dedicated to training lay ecclesial ministers, provides an intensive immersion into parish life. During the two-year curriculum, students spend the school year working at parishes around the United States and living in intentional faith communities.  Echo students are assigned experienced mentors in their parishes, and they serve the parishes in all different ways.

“I got to experience everything,” says Beth Franzosa ’05, ’07 M.A., who spent her two years in Echo at St. Thomas the Apostle in Peoria Heights, Illinois. “I led the confirmation program. I co-ran a faith social justice study group. I visited every religion class in the school and did a little project on peace with them. I worked with the youth group.”

During the summers, Echo students return to Notre Dame to study theology, earning their master’s degrees by the end of the program. Franzosa now teaches theology at Cristo Rey Jesuit High School in Chicago.

Echo is relatively young -- it was founded in 2004 -- but it’s been an incredible success. Echo directorColleen Moore ’97, ’04 M.Div. says that 90 percent of Echo graduates remain in full-time ministry after leaving Notre Dame. Roughly 45 percent work in parishes, while 25 percent go on to teach theology.

“Even if the seminaries were to be full to the brim tomorrow, we’re not backing away from lay ecclesial ministry because it flows out of Baptism,” he says. “I think there’s no turning back.”

Both M.Div. and Echo are tuition-free. Notre Dame knows that lay ecclesial ministry is not always the most financially rewarding field, especially for lay graduates hoping to raise a family. The hundreds of graduates of the two programs who have gone on to successful and meaningful careers serving the Church prove that Notre Dame’s investment is paying off.

Lay ecclesial ministry remains in the early stages of its existence. According to Father Driscoll, the Church may just be beginning to scratch the surface of its ultimate reach and impact. “Even if the seminaries were to be full to the brim tomorrow, we’re not backing away from lay ecclesial ministry because it flows out of Baptism,” he says. “I think there’s no turning back.”

Against that backdrop, one thing seems certain: Notre Dame and its alumni will continue to answer the call to be leaders within and on behalf of the Church.