Amy (Facinelli) Stone ’84 went all out for her husband Lincoln’s ’86 J.D. 50th birthday: She had a well drilled in his honor in rural Uganda.

Not exactly your typical birthday splurge. But helping people in remote villages access clean water is something the Stones are passionate about—and just one piece of the work Amy has done through Hope 4 Kids International, a Christian non-profit group that works to help children living in poverty around the world. 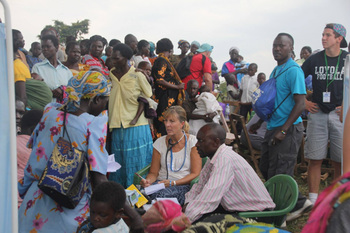 In 2010, Amy had recently retired as an emergency physician when a friend from church told her that Hope 4 Kids needed doctors for an upcoming mission trip to Uganda. Amy, her husband, and their son went "kind of blindly on this trip with 25-30 people that we had never met,” says Amy. “And then became really inspired by all that they do.” For the last six years, the Stones have journeyed to Tororo, Uganda on the organization’s two-week mission trips annually, with plans to return again this summer. While the organization works all over the world, the Stones always return to Uganda because of the relationships they’ve formed there.

Amy has focused on medical outreach during her six trips to Uganda. Hope 4 Kids partners with local clinicians on the ground and sets up in clinics or sometimes even under trees, shifting position as the sun moves. Hundreds of people show up and wait as long as they need to for the chance to see an American doctor. She sees a lot of malaria. They treat a lot of open wounds because many people aren’t wearing shoes, and things don’t heal properly.

For Lincoln, who has been on every trip with Amy, it’s gratifying to see her put her medical skills to help those desperately in need.

"People might say 'oh, you're not really fixing anything over there, you're there for a couple weeks,’” says Lincoln. “And to some extent that's true. On the other hand, if you were to interview those people and ask them why they walked a couple of hours, or ten miles, to sit in the hot sun for three hours, to wait to be tended to or just listened to, I think you would come to a different conclusion.”

The need for doctors and medicine in poverty-stricken areas is obvious, but Amy, who had previously done medical outreach clinics in Tijuana, is adamant that one doesn’t need a medical degree, or even a specific skill, to go out and have an impact. “They give people a way to do things,” she says of Hope 4 Kids, noting that she thinks many people would love to go somewhere and help but are unsure who they can trust or what they can really do. “There’s so much you can do. And just visiting them, and loving them, gives them hope. Even if you don't have a skill you can do that."

High school students have come along on medical outreach trips and done organizational tasks like checking people in. The Stones’ son has painted a school. They’ve built ovens. The family has sponsored two children through Kids 4 Hope, and their kids visit with them and play basketball together.

“People say ‘oh, you can take your kids, you can show them how good they have it,’” says Amy. “But to me, it's more to show them that people around the world are really all the same. They want the same things. The mothers want the best for their children. The children just want to play. They want to be happy; they want to be healthy.” 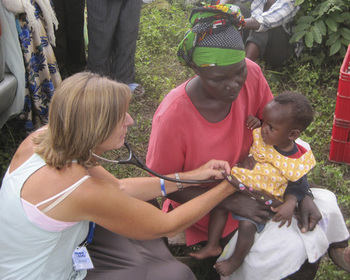 The experience isn’t always uplifting. “The first year I went I thought, I can't fix everything,” says Amy. “It's depressing, almost, at the end of the day—you saw 300 people this day, but there were 300 people that didn't get seen. So that's discouraging. But you have to say, well, I did what I could and what I could take care of I tried to do well.”

A particularly upsetting experience came when they tried to save three severely malnourished children. They raised money to send them to a hospital and get them on a feeding program, but one of the children ultimately didn’t make it. “To me that was really devastating,” says Amy. “Because I thought, we can come in here with all our money, and all our care and all that, but we can't fix it all.”

Amy won’t try to convince people to travel to Uganda, she says, because the experience is challenging. “I don't think it's something you should talk people into doing, because it's not easy, and if they're not ready, they shouldn't do it,” she explains.

“But we love what it's done to our family,” she adds, emphasizing the importance to her and Lincoln of serving as a family and instilling in their three kids the importance of serving the poor. “Our kids just have a better view of the world in general. And how other people live.”

“You can have your life,” Amy says, “and then have two weeks and go and do something really life-changing. You can.”

Even those who can’t or don’t want to go on a trip can help, she notes. Their church has a meeting every year to see if people want to join the trip, and over the past five years about 30 people have come. But they’ve also had a high school student organize a Walk 4 Water to raise money for wells, and the church has raised money for two additional wells. Lincoln’s stories about Uganda inspired one of his clients to donate money for several more wells over the last few years.

The Stone family recently sponsored another well, for her father’s 80th birthday. Amy describes going to the well dedications as an incredible experience. “You show up and the people are running, and singing, and welcoming you—you see how grateful they are for just the gift of having clean water,” she says. “It makes such a big difference in their health. And we've seen that over the six years. We go back to the villages when they have wells, and they're healthier and people are living longer.”