The Friendship That Fostered an International Collaboration

Stephanie “Tephy” Frank ’07 and Maria “Kitty” Bosch ’09 have been friends for as long as they can remember. They both grew up in Guatemala City, where their families are close. Just two years apart, they attended the same school growing up, and they both chose Notre Dame for college.

“I’ve known Kitty since she was born,” Frank explains. “We’ve been around each other for our entire lives.”

They are around each other less frequently these days, though. Bosch lives in Guatemala City, while Frank moved to Dallas a year and a half ago. That hasn’t stopped the pair from continuing to speak nearly every day. And last year, their enduring friendship made possible a joint service project that two historically vibrant Notre Dame clubs count among their most notable initiatives in years.

It started when Frank began attending Notre Dame Club of Dallas events. She learned that a few years ago the club began exploring the idea of setting up an international partnership with the Notre Dame Club of Guatemala. While discussions had taken place between the two clubs, they hadn’t launched any substantial initiatives.

Frank volunteered to help, and in May, the club made her the project lead. In addition to the fact that she was from Guatemala, Frank brought another inherent asset: she is close friends with one of the leaders of the Notre Dame Club of Guatemala, Kitty Bosch.

The longtime friends immediately started brainstorming ways for the two clubs to collaborate. In honor of the late Rev. Theodore Hesburgh, C.S.C., they set out to plan a service project in Guatemala that overlapped with the issues Father Hesburgh cared about most. They developed a list of potential options, but one idea clearly stood out from the rest.

Juan Pablo Romero Fuentes runs an innovative school and community center for impoverished children in Jocotenango, a town about 15 minutes from the city of Antigua. He was inspired to found the school after watching many of the friends he grew up with enter a world of violence, crime, and drugs as adults in this struggling area of Guatemala. He established his program, Los Patajos (“Little Ones”), to provide young people with the right foundation to resist these temptations and, hopefully, make Guatemala a safer and more stable nation. 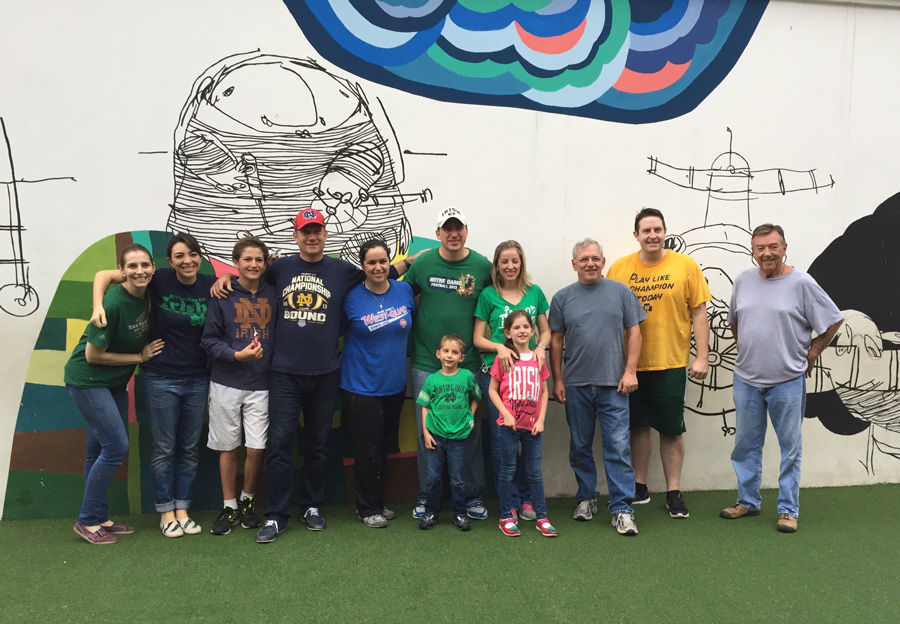 Located in an extremely dangerous neighborhood, Los Patajos aims to make its students socially and civically responsible, financially literate, self-sustaining, and entrepreneurial. It accomplishes these goals through a variety of programs centered around developing critical thinking skills. Students take classes in art, music, theatre, dance, and other creative subjects. They learn about social and political issues, develop leadership skills, and explore ways to reduce violence. The program also offers children a nutritious meal each day and provides basic medical services.

The success of Los Patajos has attracted international attention. In 2014, Romero Fuentes was chosen as one of 10 CNN Heroes from a pool of more than 50,000 worldwide nominees. Frank and Bosch were inspired by his work, and they asked Romero Fuentes what a group of Notre Dame alumni and friends could do to help. He explained that the large school desperately needed to be re-painted, but the school could not afford that amount of paint.

Painting the school would provide students with a fresh, attractive environment, but it also would serve a deeper purpose. “The point of the school is to keep kids out of the streets,” Bosch explains. “One of their objectives is to introduce them to change so they can learn how to adapt.” By learning to adapt to small changes, like new, different colored walls, the students will be more likely to adapt in the outside world. The freshly painted walls would also offer students new space to work on murals and other artistic projects.

Frank and Bosch successfully convinced the leaders of their respective clubs that Los Patajos was the perfect option for a joint service project, but they faced a new challenge: raising enough money to make it possible. On Oct. 20, Frank emailed the leadership team of the Dallas club with her full project plan, explaining that they needed $3,140 to make it a reality.

The plan must have impressed the Dallas leadership group. Within 12 hours, they had already raised half the money they needed. Only two weeks later, they were fully funded. “The fact that it happened so quickly is just mind blowing,” says Sean McIntyre ’09 M.B.A., who served as the president of the Notre Dame Club of Dallas in 2015. “And that’s a tribute to the club’s generous donors.”

McIntyre works for American Airlines and was able to secure the small group traveling from Dallas affordable international flights on short notice. On the weekend of Nov. 20-22, Frank, McIntyre, and Jim Murphy ’76 met up with Bosch and 11 other Notre Dame alumni and friends who live in Guatemala. Armed with high quality paint in the colors Romero Fuentes had requested, the group got to work.

On Saturday, Nov. 21, they painted the walls at Los Patajos from Noon until 6 p.m. It was hard work in rainy and humid weather. By the end, the group was painting in rhythm to Michael Jackson songs to keep moving at a fast pace. But the Notre Dame alumni and friends were inspired by the work and grateful for the opportunity to give back to Los Patajos and the students.

“We basically were able to give over 100 kids something beautiful before Christmas. And it was such a blessing for us to be able to do that,” Frank says. “A little paint—well, a lot of paint—can really change a human being’s perspective. It was big.”

Later that night, the representatives from the two Notre Dame clubs gathered at a bar for dinner, a few drinks, and to watch Notre Dame defeat Boston College in the Shamrock Series. The next day, the representatives from Dallas flew home, but the leaders of both clubs were confident that this wouldn’t be the last project the two came together to tackle. “I only see it growing from here,” McIntyre says.

The clubs are already discussing options for 2016. They’ve considered partnering with Los Patajos again, adopting a new cause in Guatemala, or collaborating on a service project in Dallas. One thing is certain: Frank and Bosch, who is now the president of the Notre Dame Club of Guatemala, are excited to continue working together.

“Kitty and I just have this kinship,” Frank says. “We just gravitate toward each other.”