A Match Made in the Military

Helicopters brought them together.

Neither one set out to be a pilot. Converging factors pushed them in that direction, and through a stroke of good fortune, they ended up at Fort Campbell at the same time. 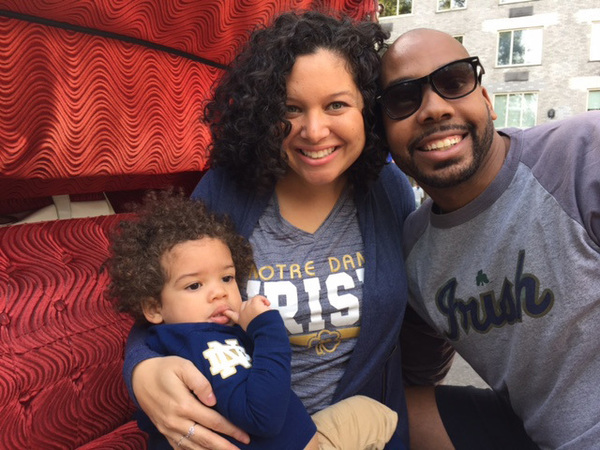 Heather ’09 M.B.A. and Michael Burns ’09 M.B.A. are perfect for each other. They fell in love, got married, and built a family together. They have supported each other’s careers, cheering each other on as they have ascended to prestigious posts in the corporate world.

But their love story never would have been written if not for a shared commitment to serving others. This desire drew both of them to the Army. It inspired them to attend flight school and learn to fly helicopters. And it brought them both to Fort Campbell and each other.

Growing up in Maryland, Heather didn’t need to look far to find someone committed to serving others. Her mother was a nurse in the Army Reserves. That example took hold early and inspired Heather from a very early age. As a high school student, she served as a volunteer firefighter.

When Heather chose to attend Penn State, she opted to enroll in the Army ROTC program. The experience offered structure and discipline at a time when many young people lack both.

“It definitely kept you in line because you had to wake up early practically every morning,” she remembers. “You weren’t likely to miss out on 8 a.m. classes.”

As her college career drew to a close, Heather didn’t know which direction her service requirement would take her. Flying helicopters was not something she initially considered. “It was kind of a strange thing,” she says. “I just happened to take the flight aptitude test when I was in ROTC, and I scored well.”

Her next step was flight school at Fort Rucker in Alabama. There, she trained as a Black Hawk pilot, learning to fly the complex utility helicopters. Once she finished her training, Heather was supposed to be stationed in Honduras. A last-minute change of plans—something you’re always prepared for in the military—landed her at Fort Campbell instead. She filled a number of different roles during her stint there. The most unusual was as a member of the Soldier Show, a company of performers who travel around the world to entertain troops at different bases. Heather built sets, played the trumpet, sang, and danced at stops around the U.S., in Japan, and in Korea.

Heather never deployed overseas, but her time at Fort Campbell altered the direction of her life. It’s where she met another helicopter pilot named Michael.

While Michael participated in Junior ROTC as a high school student in Texas, he wasn’t necessarily planning to follow that path in college. But when he set up a trip to visit New York University, one of his JROTC commanding officers convinced him to add another stop. So after touring a school in the heart of Manhattan, Michael traveled 50 miles north to the United States Military Academy in West Point. By the time he left the well manicured campus, he was determined to return as a student.

When he did enroll, Michael was in for a surprise. “I got hit with a ton of bricks. In high school, I was a superstar,” he says. “I get to West Point, and everybody is the homecoming king. Everyone is the team captain. Everyone is the superstar.”

Michael, who had never received below a B+ in his life up to that point, failed his first semester of chemistry. Discouraged, he considered leaving the academy. Thanks to the encouragement of his family, he decided to stay and ended up excelling.

Initially, Michael planned to pursue a career as a lawyer, but attending law school added an extra two years onto the required post-graduation service. Unsure he wanted to make that commitment at the time, Michael opted instead to give flying a try. Like his future wife, he was sent to Fort Rucker for flight school, where Michael learned to pilot Apache helicopters. One morning, near the end of his time there, he came home to his apartment, turned on the television, and learned a plane had flown into the World Trade Center.

“I think everybody in uniform can remember where they were and what they were doing,” Michael says, thinking back to Sept. 11, 2001. “And knew that their experience in the service was going to be very different than the people before them.”

Weeks later, Michael was deployed to Afghanistan. He was in charge of four of the first eight Apache helicopters in the country during the United States’ initial invasion. They supported Special Ops and Delta Force missions throughout the country. He returned home after six months. But when the U.S. invaded Iraq, Michael was one of the first Apache pilots to deploy. He was there for more than a year, leading a group of helicopter pilots and later organizing efforts to rebuild war-torn towns in Northern Iraq.

When he returned from his second tour in 2004, Michael was stationed at Fort Campbell, where he met another helicopter pilot named Heather.

One of Michael’s closest friends was Heather’s first commanding officer at Fort Campbell. The two began traveling in the same social circles and were initially, as Michael puts it now, “in the friend zone.” Soon, their shared values and mutual admiration made them something more.

Michael loved that Heather accepted him for who he was. Heather was attracted to the genuine happiness Michael felt for others. “If you you accomplish something, the joy that he has for your accomplishment would be the same than if he had the accomplishment himself.”

After they had been dating for only a few months, Michael was transferred to Fort Lee in Virginia, 700 miles away from Heather. “Being in the military, you have to learn to adapt,” Heather says. “You’re used to having long distance relationships.” Their love continued to grow, and in December 2005, they got married.

A year later, Michael was preparing to leave the military and weighing potential career paths. Then, the Army approached him with an enticing offer. They would pay for Michael to attend business school full-time if after earning his degree he would return to West Point to serve as the director of diversity recruitment and enrollment at his alma mater, the U.S. Military Academy. Michael knew exactly which graduate school he hoped to attend.

A diehard football fan, Michael has cheered for Notre Dame ever since his father bought him a discounted Fighting Irish jersey when he was 4 years old. Michael and Heather visited campus, and an admissions counselor encouraged Heather to apply too. They were both accepted, and in the fall of 2007, the couple relocated to South Bend.

They loved their time at Notre Dame, and each had promising career options in front of them with their M.B.A. degrees in hand. After three years in admissions at West Point, Michael left the Army and opened his own operational consulting company. He then spent 18 months at the chief operating officers of AnesthesiaOS, a company that builds software for electronic medical records for anesthesia. Earlier this year, hoping to find another position in the diversity field, Michael accepted an offer to become the head of Institutional Clients Group Diversity at Citibank in New York City.

“We’ve probably spent more time apart than we have together, but it hasn’t affected us,” Heather says. “We’re still together even if we’re not physically together.”

Meanwhile, while at Notre Dame, Heather became interested in the fast-paced world of trading. She took a position with Morgan Stanley in their electronic training group. She spent her first two years in the firm’s New York office but became interested when Morgan Stanley started expanding its equities business in Brazil. Heather studied Portuguese, learned it fluently, and relocated to Brazil in 2011 to lead their electronic trading practice in the country.

Michael had to stay in the U.S. due to his own professional obligations, but he supported Heather’s move and visited her in Brazil as frequently as possible. “Heather and I always agreed that we would never let someone else’s career trump the other person’s career,” he says. Their son, now two years old, was born in Brazil and is a dual citizen.

“We’ve probably spent more time apart than we have together, but it hasn’t affected us,” Heather says. “We’re still together even if we’re not physically together.”

When Michael started his new job at Citibank this year, the entire family permanently relocated to New York, where Heather is now a vice president at Morgan Stanley. Heather and Michael both say that, along with their training at Notre Dame, their military backgrounds have served them well in the corporate world. “You are accustomed to speaking to people of many different ranks and different levels of responsibility and working across teams,” Heather explains. Michael agrees, stressing that the military teaches you how to “take people from very different backgrounds and have them all rowing the ship and all the oars going in the same direction at the same tempo to get to the same destination.”

The couple knows that the future will present many unknown opportunities. They don’t know what their next jobs or moves will be, but they are prepared, as always, to adapt and thrive.

One of these days, they might even pick up an old hobby. “We do talk about one day renting a helicopter, but we’ve been married ten years and we haven’t done it yet,” Heather says. Neither of them has flown since leaving the military. “I think my nerves were a lot tougher back then, and now I’m a parent.”

There is one thing Heather and Michael know for sure. Whatever challenges and adventures lie ahead, they will embrace them as a committed, supportive, and loving team.