A Leprechaun Looks Back 50 Years Later

From terriers to leprechauns, explore the history of Notre Dame mascots.

By Kevin Brennan ’07
Notre Dame Alumni Association
It started with a knock on the door of 217 Breen-Phillips Hall.
John Brandt ’65, a freshman, opened up to find the captain of the Irish cheerleading squad staring back at him. The upperclassman had come looking for Brandt, who stood 4-feet-11-inches as he began his first year at Notre Dame.  He told Brandt that his size made him a potential fit for a new position with the cheerleaders, and he asked the freshman to report to the Knute Rockne Memorial Gymnasium the next day.
Not sure what he might be getting himself into, Brandt walked to the western edge of South Quad the following afternoon and entered the Rock to find two other short students there to audition for the same role. The cheerleading captain brought out the suit—green cotton pants, a small vest, a green blazer, a green hat, and a pair of green shoes that turned up in the front—and asked each of them to try it on.
“I guess it fit me the best,” Brandt remembers. “They said, ‘You’re the guy.’”
With that, after just a few weeks on campus, Brandt became the Notre Dame leprechaun.
It was a role he may have been born to play. “My Mom told me that when I was born she was holding me in her arms and she said, ‘When you grow up, you’re going to go to Notre Dame.’”
His mother was right. Brandt grew up in Elyria, Ohio, about 30 miles west of Cleveland. As a high school senior he applied to only one college and moved to South Bend in the fall of 1961. A scratch golfer, Brandt expected his main extracurricular activity at Notre Dame would be playing on the golf team. At his size, he certainly didn’t think he’d be spending any time on the football field.  And the position Brandt was asked to fill was at that time an unfamiliar one to most Notre Dame fans. 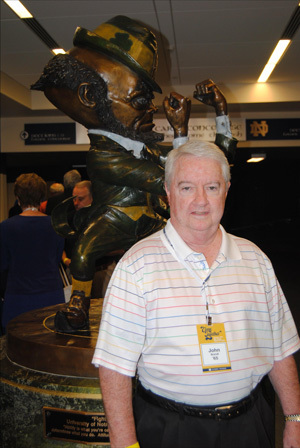 The history of the leprechaun at Notre Dame is complicated. For years, the school’s mascots had been dogs, mostly Irish terriers with names like Tipperary Terrence and Clashmore Mike.  In the early days of Notre Dame football, the leprechaun was not used as a mascot, but leprechaun imagery was used occasionally in football programs. In the late 1940s, an “Irishman” or the “Forgotten Irishman” appeared at pep rallies and participated in the band’s halftime shows.
The earliest documentation of a leprechaun joining the cheerleading squad was in 1960, when, according to an article in Scholastic, a student named Terry Crawford dressed as a leprechaun and would walk back and forth on the sideline with the team’s canine mascot. Brandt assumed the role a year later.
His major responsibility as the leprechaun was to look after the Irish terrier.  At the time, the dog lived on the eastern edge of campus in the home of a Notre Dame Stadium groundskeeper. Brandt would go over once a week to make sure the dog was comfortable around him. “In a stadium of 60,000 people, the dog could get a little freaked out,” Brandt says. “But we became pretty good friends.” After each visit, he’d return to Breen-Phillips Hall with a pie made by the groundskeeper’s wife, boosting Brandt’s popularity with his dorm-mates.
In the first contest of the 1961 season, the Irish hosted the Oklahoma Sooners. It was Brandt’s first game as the leprechaun, and it led to perhaps the most memorable moment from his time wearing the green suit. At halftime, Brandt pleased the fans in the crowd by taking the Irish terrier for a walk around the field. The pair of mascots paused when they reached the Oklahoma bench. “The dog decided to lift his leg and he peed all over their oxygen equipment,” Brandt remembers. “Of course there were some Oklahoma fans in the stands watching all this, and they were not happy about it.”
Brandt served as the leprechaun for two seasons before stepping aside at the beginning of his junior year so that he could watch the games from the stands with his friends.  In 1966, Notre Dame’s Student Senate voted to make the leprechaun an official mascot of the University. By the end of the decade, the Irish terriers were phased out, and the leprechaun has served as the only mascot ever since.
In the ensuing years, Brandt has watched from afar as the position has evolved significantly. “I’m in total awe of them,” Brandt says of his successors. “What they do, leading the pep rally. … You’ve got to have a public relations degree. It’s big time.”
Brandt, a stock broker who lives in South Florida, wouldn’t fit into his old leprechaun suit anymore. He grew 7 inches at the end of his college career and now stands 5-feet-6-inches. But one thing hasn’t changed in the 50 years since he graduated: Brandt’s passion for the University and its teams.
“If they’re on television, I’m watching it,” he says. “I’m watching women’s soccer. I’m watching women’s basketball. I’m watching men’s lacrosse.”
On September 5, Brandt will be watching when the Irish take on the Texas Longhorns in Notre Dame Stadium. A big smile will come across his face when he sees senior John Doran take the field. The two men have never met and were born five decades apart, but they have one thing in common.
They’re Notre Dame leprechauns.
Research for this story courtesy of the University of Notre Dame Archives.