Dr. Eleanor Walker '84 has dedicated her life to treating those suffering from cancer.

Ask Eleanor Walker ’84 about the keys to defeating cancer, and she’ll talk about the paramount importance of early detection. She’ll tout the incredible technological advancements that have revolutionized treatment, and she’ll stress the need to maintain a healthy diet and exercise regularly.

But there’s one more factor that she says cannot be overlooked: The power of prayer.

Some might be surprised to hear a world-class radiation oncologist cite faith as an important ingredient in overcoming this dreaded disease. They shouldn’t be, Walker says.

“There’s lots of data showing patients who have a belief system and a support group, especially spirituality, do better,” says Walker, who has devoted three decades to the treatment of cancer. “They do way better. So you can’t forget God in this at any time.”

“I think it makes patients feel good to know that their doctor does believe in God.”

A devout Seventh-day Adventist, Walker is discerning in how she makes this recommendation to her patients. Not everyone who comes through the doors of Detroit’s Henry Ford Hospital shares her Christian faith, but most believe in some higher power. And while other doctors might hesitate to bring up spirituality, Walker doesn’t. She knows how valuable it can be.

It wouldn’t surprise anyone who knows Walker well that she takes this approach. Since her childhood, Walker’s life has been defined by her faith, her passion for learning, and her commitment to help those in need. These three motivations have combined to propel Walker to an incredibly successful career, impacting thousands of lives along the way. 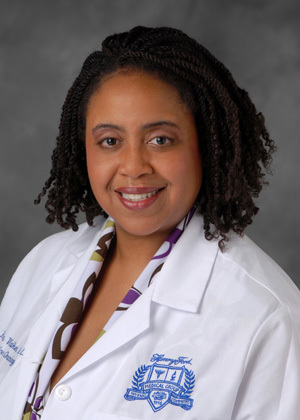 The child of Caribbean immigrants, Walker grew up in the East Flatbush neighborhood of Brooklyn. Her parents instilled in her an enthusiasm for and seriousness about her education. Walker would watch her classmates go out and play after school before doing their homework, while her mother insisted she come home and complete all her assignments before leaving the house or watching television.

Walker always had a knack for science. On the day Mendellian Genetics was introduced in class, Walker--at the age of 10--was hooked. “I decided I wanted to be a geneticist,” she remembers. “And the best way to become a geneticist is to become a doctor.”

Her passion for genetics wasn’t fleeting. As a high school student, Walker volunteered at clinics devoted to treating those suffering from sickle cell anemia and made trips to Albany and Washington, D.C. to advocate for increased funding for genetic testing of infants.

An excellent student at Midwood Science, one of New York City’s elite public high schools, Walker was overwhelmed by the number of letters that poured in from universities around the country. Students of her caliber at her high school were expected to pursue options in the Ivy League, but the encouragement of her high school counselor and the offer of a free plane ticket convinced her to visit Notre Dame in April of her senior year. That visit coupled with a full scholarship convinced Walker to leave the East Coast and the Ivy League behind.

If Walker had a misgiving about attending Notre Dame, it was if she would fit in at a Catholic school. Once on campus, her concern quickly dissipated.

“Catholicism is part of Notre Dame, but it’s not pushed on you that you have to be Catholic,” Walker says. “There’s a spiritual air about the University. Everybody does service. So whatever religion you are, people try to help you be the best person you are.”

“They didn’t have bagels and cream cheese,” she says, shaking her head in disbelief more than three decades later. ”I’m like, ‘Where am I?’”

The bigger adjustment--by far--was the shift from New York City to South Bend. When Walker and her family went to the mall during move-in weekend, they were shocked to find out that the last bus back to campus left in the late afternoon. Walker couldn’t believe there was no 24-hour public transportation. And don’t get her started on the food.

“They didn’t have bagels and cream cheese,” she says, shaking her head in disbelief more than three decades later. “I’m like, ‘Where am I?’”

Walker felt at home in the classroom, though, and excelled academically throughout her four years at Notre Dame. Armed with a degree in Biology and Microbiology and a letter of recommendation from the legendary Emil T. Hofman, she gained acceptance to the prestigious medical school at Washington University in St. Louis.

Walker’s longstanding plan to pursue genetics hit a snag during her second year of medical school once she took oncology and found her true calling. After earning her medical degree and then completing a radiation oncology residency at the University of Maryland, Walker found herself back in the Midwest, accepting a position at Detroit’s Henry Ford Health System, where she now serves as the Director of Breast Radiation Oncology and the Medical Director for the Center for Integrative Medicine.

Despite her considerable administrative, research, and teaching duties, Walker remains passionate about and devoted to patient care. Informed by her training at Washington University and her personal experiences as the primary caretaker during her mother’s long battle with Alzheimer’s, Walker strives to treat each patient she sees the way she would want a member of her family to be treated by a doctor.

She prides herself on the ability to explain complicated concepts and life-changing updates in understandable, straight-forward language. She goes out of her way to get to know her patients, learn about their families, and offer emotional as well as medical aid. “If some days I cry with them, I cry with them,” Walker says.

She encourages her patients to rely on those who can offer the types of support doctors can’t: close family, dear friends, and, perhaps most importantly, a higher power. “I think it makes patients feel good to know that their doctor does believe in God,” Walker explains. “Because they can identify with that, especially at this point in their lives.”

Walker has faced many trying times in her career, losing patients she had grown close to. But the victories, which are growing in number as medical innovations increase, have offered a lifetime of inspiration.

Perhaps the ultimate fulfillment comes when Walker sees someone she has treated in the past. The greeting rarely resembles your typical doctor-patient interaction.

“They don’t want to shake my hand,” Walker says. “They always want to give me a hug.”