Hurricane Harvey’s floodwaters covered the streets and poured into homes in yet another Houston neighborhood. The storm’s winds tore down power lines that sparked and popped. Residents scrambled to tenuous perches atop furniture and rooftops, waiting to be rescued.

That’s when Brendan Kiley ’10 arrived. Lowered from a helicopter, the Coast Guard rescue swimmer moved from home to home, helping people into a basket his team raised from the water.

The mission was all in a day’s work for Kiley, whose job is all about helping people to safety, whether he’s responding to a natural disaster or handling a medical evacuation in Cape Cod, Mass., where he’s stationed.

It’s a natural fit for someone who inherited a love of swimming from his mother. Growing up in Muskegon, Mich., he spent much of his time in the pool or on Lake Michigan and joined the Coast Guard to make a difference.

“I wanted to be hands-on in these types of rescue scenarios,” Kiley says. “It’s kind of a wild dream, but it happened. I love it. It’s what I signed up for and it’s everything I hoped it would be.” 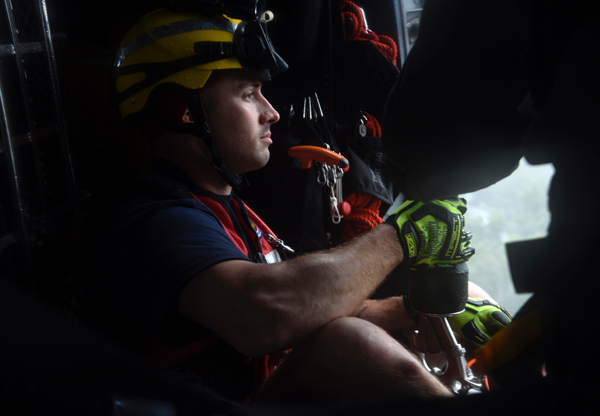 Kiley was called to Houston as Hurricane Harvey hit the city. Much of his rescue work involved getting people from their homes—which were partially underwater at this point—to the rescue basket that a helicopter would raise.

In many cases, that meant guiding people—including non-swimmers—from their homes to the middle of a submerged road, away from the downed power lines that could entangle the helicopter. The end of the rescue was often the most difficult part. As the helicopter hovered above, its blades forced air downward, creating a surging rotor wash that sometimes panicked the people Kiley was trying to help into the rescue basket.

“It’s still actively storming out, and it’s pretty intense, and their entire life is upended,” he says. “This is where they live and it’s under four to eight feet of water …  so they’re just out of it sometimes and they get hit with the rotor wash and they feel like they can’t breathe … maybe some water gets in their face or maybe their head goes under for a second, and they just try to get out.

“And a lot of times they’re grabbing onto me, climbing on my head, trying to climb on top of the basket so the basket flips on its side, so this whole time you’re just trying to get them in as quickly as possible.”

A particularly memorable rescue took place on a roof during his second day in the city. After he arrived, a woman pushed a Tupperware tub toward him. Sizing it up, Kiley guessed it was luggage, and, as he had so many times before, told the woman she would need to pick few essentials and leave the rest. There simply wasn’t room for it all in the helicopter, he explained.

Shocked, Kiley removed the lid from the tub.

“And sure enough there were two young children in there—I think a two-year-old and a newborn,” he says. “They were just sitting there, not crying. It was amazing.”

Experiences like that make the job rewarding for him: “As far as being able to have that personal contact with people in these potentially deadly situations, there’s nothing like it.”

Kiley doesn’t do his job alone. Each rescue requires the coordinated efforts of a small crew. 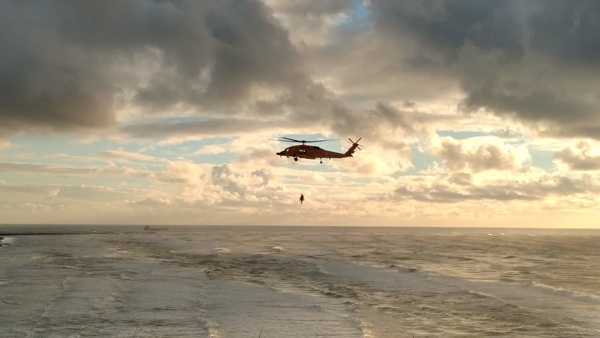 “I have the glamorous position of actually getting lowered down into the water and sending people up, but I always keep in mind everything that allows me to be on that hook,” he says. “We have two pilots per aircraft. There’s a flight mechanic who operates the hoist and puts me down. And then just the maintenance—there’s a massive amount of maintenance that goes into these helicopters to keep them going in these intense conditions that’s incredible. And I have full trust in all the guys I work with to make this happen. I’m really glad they’re there.”

When he’s not helping with a rescue, Kiley is training with fellow Coast Guard members back in Cape Cod. They maintain and test equipment, work out daily to stay in shape, and spend plenty of time on the water.

“There’s a bunch of Coast Guard small boat stations in the area and then various cutters out at sea, and we’ll meet up with them and we’ll practice hoisting off the back of the boat, hoisting from the water, we have these rescue dummies that we practice all of the devices on,” Kiley says. “We’re constantly training.”

That disciplined preparation enables them to tackle a variety of scenarios. Last year, for instance, Kiley deployed to the Bahamas for two weeks after Hurricane Matthew, where he assisted with flyovers that allowed officials and journalists to assess the damage. Last summer, he spent two months in Kodiak, Alaska, during a busy tourist season. At one point, he helped hoist an elderly woman off a cruise ship as part of a medical evacuation. He often handles similar calls closer to home—perhaps a fisherman injured out at sea who requires a trip to the emergency room.

No matter the situation, Kiley says, the goal is the same: bring people to safety.

“We train every day outside of these hurricanes,” he says. “So when you get into the hurricane …  I don’t even question whether I can do it, it’s just a question of what’s the best way for the survivor, what’s going to be the safest and the least traumatizing way for me to get them to safety.”