A World of Healing

But they had no idea the trip would change the course of their lives, launching them on a series of international missions that would allow them to serve some of the world’s neediest people.

That trip abroad would turn out to be the first of three—so far. It would shape the contours of the couple’s family, which includes children adopted from China and Ethiopia as well as two biological children. And it would ultimately deepen their Catholic faith.

“We didn’t think it was going to be a lifestyle,” Thoene says. “I know I didn’t think of myself as a missionary. So it’s been a really humbling and challenging experience at times, but also a really life-giving, faith-building experience for both of us and for our family.”

Since that first stint abroad, the couple has also served in Guatemala and Cameroon, living in a succession of rural communities facing great needs. They’ve treated patients suffering from malaria, typhoid, and malnutrition. They’ve dealt with challenges ranging from lack of water to medicine shortages and an undependable blood supply. And they’ve navigated language barriers and cultural differences, all while raising a family.

Thoene and her husband have made all three trips through the Mission Doctors Association, an organization that connects Catholic physicians with underserved populations around the world.

Ghana was the first stop. From 2000 to 2002, the couple lived in Kpando, a small town. Resources were scarce: no Internet or cellphones, and no fresh vegetables like lettuce or carrots. Basic communication and grocery runs for anything beyond staple foods required a 90-minute trip.

But a lack of resources at their hospital posed the largest challenge. At the time, Ghana lacked medicine to treat HIV, which meant the virus became a death sentence rather than a chronic but manageable medical condition. Making things worse, local medical professionals were hesitant to inform patients they had HIV because of cultural norms. And tuberculosis, treatable if caught early but deadly if not, was also widespread. As a result, Thoene and her husband watched a lot of younger people die.

“You learn a way things could be done in medical school and residency, and then you go to the developing or Third World and things aren't done that way and you have to adjust your expectations,” Thoene says. “So it was challenging. It was a lot of work. Sometimes we were the only ones on call, the only ones in the hospital with a lot of patients. It was a whole new cultural thing. Just a lack of resources, kids dying—you hardly ever see that here—that was hard. And I don’t want to say that you become callous to that or become used to it but you do learn to cope a little bit better with that. That was our first experience of a lot of death.”

Despite the challenges, the couple helped improve the quality of care in Ghana. They implemented basic hand-washing protocols at their clinic. In addition, they ended an old practice of waiting to treat people until they had paid their bill in full, a setup that had led to treatment delays. And they ensured the clinic acquired a small supply of blood for on-site use. Before they arrived, no blood was kept at the clinic. One person simply kept a list of locals who could give blood, and then went to take it whenever someone came in needing it.

“These were small things that just happened automatically here, but there, it was different,” Thoene says.

In 2002, Thoene and her husband returned to the U.S., where they worked at a community health center in Medford, Oregon, until 2010. During this time they had two biological children—Christopher, 13, and Julianne, 11—and adopted another two—Elizabeth, 13, from China, and Nicholas, 10, from Ethiopia. 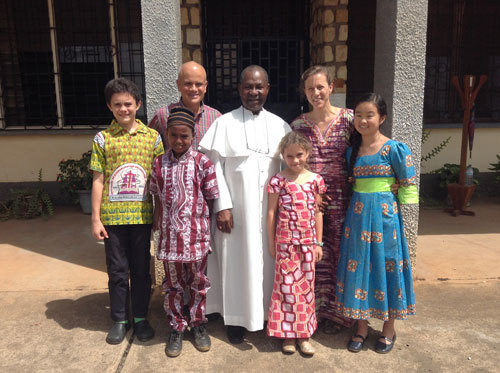 “I think we saw the need,” Thoene says. “We would have liked to have adopted from Ghana because we had been in Ghana, but at the time we were looking they didn’t have an active adoption program. We knew Ethiopia did, and China is well established. It’s much harder to adopt internationally these days than it was at that time. We had a pretty easy time and didn’t have to wait too long for either of them. So it’s been a very good experience for us—we’re very blessed."

Adapting to Life in Guatemala

In 2010, Thoene and her family moved to Santiago Atitlan, Guatemala, a remote village where they lived until 2013. Many of the locals had never left the immediate area, wore traditional dress, and spoke an indigenous language, with some speaking Spanish as a second language.

“I think in all the places language has challenged us some, but most in Guatemala because we were speaking Spanish, which was not our first language and then the people there were also speaking their second language,” Thoene says. “For most people that’s going to be hard. There’s always going to be something they can’t say or something they can’t express. It doesn’t come out in the same way as it would in their language.”

After about eight months, the couple and their medical colleagues moved into a newly built hospital, which gave them more resources to serve the local population. Over time they trained local doctors to ensure the community could be self-sufficient. 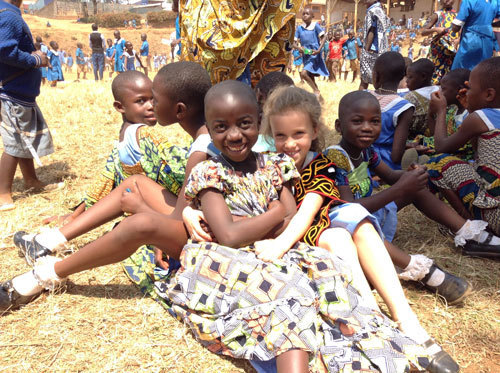 And their children, on their first trip abroad, adjusted quickly. They enjoyed traveling around in tuk-tuks (three-wheeled motorized vehicles popular in Guatemala and other countries), developed a taste for tortillas, and enjoyed simple pleasures such as swimming in a hotel pool.

“Kids are highly adaptable, more so than we could be,” Thoene says. “With our kids, the two older ones were in first grade when we left and they had only been to school in the U.S. just for a little bit. And they went right into a school in Guatemala, Spanish-speaking only. And they did great. They were speaking Spanish fluently within six months. It’s pretty amazing.”

From 2013 to 2016, Thoene and Burket spent their third stint abroad, this time in Cameroon. HIV was a concern, as it had been in Ghana almost a decade and a half earlier. But things were different this time. Medication was available for free, although the supply was somewhat limited. Now, the biggest challenge patients faced was braving bad roads during the rainy season to fill or refill a prescription—still no small task.

"But transport is the biggest barrier—getting in to the clinic or to the hospital to get the medicine every month."

“It’s great,” Thoene says. “The world community has really come together to get medicine to people. It’s been life-changing. But transport is the biggest barrier—getting in to the clinic or to the hospital to get the medicine every month. And people have to spend basically the whole day there after they travel, are educated on the medicine, have labs taken, and do all these things. So if you have a regular job you have to take time off work. And that’s challenging.”

In Cameroon, Thoene says, she and her husband finally hit their stride as missionary doctors.

“It was us maturing and maturing in medicine, and knowing how to do things without all the resources and trying to think outside the box of however you’re going to get whatever they need done,” she says. “I think one of the many blessings we received was the people we met—the local people, other missionaries, other volunteers—they were some of the greatest people, and we’ll never forget.”

Last year, Burket and Thoene moved back to the United States to help care for Thoene’s father. They now work at a community health center in Frazier Park, a small town in southern California.

The couple plans on serving abroad again at some point, continuing their pursuit of faith-filled service—something Thoene developed a passion for decades ago. As a student at Notre Dame, she became involved in multiple service opportunities. And through Holy Cross Associates, she worked for a year at an addiction treatment center as a young alumna. When she and her husband met at the Oregon Health & Science University School of Medicine, the two shared a Catholic faith and a desire to make a difference.

“For me I think it was a lot of experiences with service, and with the Center for Social Concerns,” Thoene says. “I had a lot of good experiences. The Summer Service Project between my sophomore and junior year was really life-changing for me. The Notre Dame Encounter retreat was a really great experience. And being with Holy Cross Associates really opened my eyes to the world and solidified my desire to serve.”

As she looks ahead to what might come next, Thoene urges anyone considering service abroad to act on their interest.

“I think if people feel any inclination to serve and to see the world in a different way they should just go and do it,” she says. “The world is a much smaller place, it’s much easier to get to places, and I think it’s really a life-changing experience when you see the challenges some people have. If you have kids, you can still go; your kids will do great. Your faith will be changed and you’ll meet some amazing people.”