Four years ago, as an associate working at a Chicago law firm, Ge Wang ’08 couldn’t find a suit that fit to his liking. A stylish dresser, he wanted to capture the well-tailored look he saw in men’s fashion magazines, but the custom suits he bought didn’t quite make the cut.

That’s when he tried an experiment that would snowball into a new career.

“If you’d told me 10 years ago that I was going to be doing this, I would have said that you were crazy,” says Wang, who founded ESQ Clothing, a bespoke men’s clothing company.  “At first I thought, why don’t I try making a few suits for myself and some friends? It began as a side project. It was like, worst case, I get a few nice suits out of it. One suit becomes two suits, and we’ve been able to scale things up. It wasn’t really until two, two and a half years ago when I decided this is full time. We’ve just grown from there.”

Wang opened a shop on Jackson Street in downtown Chicago, and business grew through word of mouth. Now, his customers include athletes seeking a memorable look as they enter the NBA or NFL draft, and Wang works with a team of suppliers and tailors across the globe to create well crafted and highly individualized suits.

Wang’s process begins and ends with the client. Although he’ll likely know more about men’s fashion than a customer who walks into his shop, he always starts by finding out what a client wants. Their sensibilities guide him from start to finish, providing a framework within which he’s free to innovate.

“They’re the lead designer,” he says. “I’m kind of an outside consultant.”

Recognizing that each customer has unique needs allows him to customize suits that work for them. 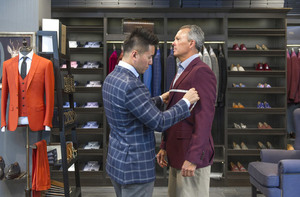 “We try to keep it as simple as possible,” he says. “It really depends on the client. If, for example, we have a conservative tax attorney or someone who’s in criminal defense where they have to wear a suit every day, or especially corporate law when you’re saying a light gray suit is too crazy, with those we’ll help them limit the options a little bit whereas if we’re getting someone ready for the NFL Draft, when it gets crazy, we can do crazy. Every time we get one of our guys in for the draft, we always tell them, we’ll make you stand out, but we don’t want you to end up on the worst dressed list 10 years from now.”

As creative director, Wang walks customers through a series of choices that help shape their suit. When it comes to buttons, do they prefer brass, horn, or mother of pearl? In thinking about their suit jacket, do they want side or back vents? When it’s time to pick their trousers, would they like adjustable tabs that eliminate the need for a belt? There are more than 35,000 fabrics to choose from, and even the silk lining of a suit jacket can be customized with a specially printed image. The result? A unique suit that reflects their sartorial preferences, seasoned with a touch of Wang’s sage style advice.

“You get to come in, you get to pick out the lapel, and from the fabrics to the linings, you’re talking about hundreds of millions of combinations you can put together,” Wang says. “We try to never make the same thing twice.”

Getting a customer the perfect fit starts with taking at least 34 measurements. Wang also looks at things like posture and how a client carries himself. Does he slouch a bit or have good posture? That affects how the fabric will be cut, ensuring that the suit is neither too tight nor bulging in places. He also looks at things like shoulder slope or hip rotation — little details that can affect whether one arm or leg should be cut slightly differently than the other.

“Everyone measures differently, and at the end of the day, it’s not how you or I measure, it’s how I communicate with my tailors, and how they want me to measure,” he says. “So I’ve spent quite a lot of time overseas learning the process.”

There’s also the question of the suit’s cut, with English and Italian among the more popular classic styles. The Italian slim cut is a trendy choice these days, though since it hugs the shoulders more tightly, it’s not the right choice for everyone. Some might benefit from the more angular British style. Even then, much of success comes down to good measurements: A British style for a slender Brit who runs for exercise is going to look somewhat different than then same style custom-made for an American who lifts weights and has a slightly larger physique. It’s that level of detail that off-the-rack designers can’t account for, and it’s why some men struggle to find a great suit.

“It’s not just oh, let’s alter this and boom, we’re done. It’s trying to get to the root of why things are the way they are,” Wang says.  “The trend now is for younger guys to get suits that fit too tightly. We want you to look trim, we want you to look as slim as possible, but we want you to be comfortable, and that’s what we’re here to do.”

Although Wang happily serves as his customers’ creative director, he delegates production to teams across the globe, working to get the best materials and craftsmen.

Source fabrics come from Italy and the United Kingdom. Canvassing, an interior support that allows for a better fit, is generally handled in Germany. Most items are sewn together in China or Italy, and some materials come from North Africa.

That reach allows ESQ to provide a quality bespoke suit without the classic price tag one might expect. Suits start at $2,000 (although Notre Dame alumni receive a 15 percent discount) and are ready in about four weeks.

“Before, you would think of a bespoke suit, and you’d have to go to England, you’d have to go to Milan, and you’re talking, this is what I mean by those master tailors who are cutting things from scratch themselves,” Wang says. “First off, if you wanted something like that, your minimum entry point is probably $10,000, and be prepared to wait three months. So what we’ve been able to do is, we take our team of 50 tailors, we have 10 people that just work on chests, we have a group of five who just work on shoulders. That’s how we’re able to get your suit ready in four weeks.”

The Life of an Entrepreneur

Looking back on the last few years, Wang is amazed at how quickly things have changed. What began as a simple experiment grew into a side hustle, and, more recently, a full-time job.

After all, these days, ESQ is making clothing for athletes as they enter the NBA — think Kris Dunn, Damian Jones, Ron Baker, Alex Poythress, and of course Demetrius Jackson — or the NFL (think former ND football players like Matthias Farley, Romeo Okwara, Kyle Rudolph, Harrison Smith, Jaylon Smith, Ronnie Stanley, and Manti Te’o). It also takes care of an increasing number of Notre Dame alumni: Wang estimates about 15 to 20 percent of his business comes from Domers.

The company continues to experiment with new items, including a more stylish winter boot, a waterproof and windproof formal coat built for Chicago winters, custom-made dress shoes, and a variety of off-the-rack items, including ties, cufflinks, and suits.

Last summer, as the company continued to grow, Wang hired a vice president, Jordan Valleskey, who helps him manage the day-to-day demands. 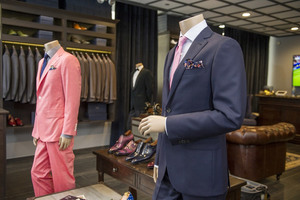 Wang’s willingness to learn and try new things has helped the company grow. But it’s not all exciting innovations and new discoveries. A lot of the job is slogging away and putting in the long hours needed to make things happen.

“Be prepared to work much longer hours than whatever you’re doing right now, whether it be a doctor or a lawyer or whatever,” Wang says, reflecting on his transition to entrepreneurship. “I used to think I would work 40 to 50 hours a week, and I threw that out the window a long time ago. If I’m not working 80 hours a week, something’s probably off right now. So it’s a lot of hard work, but I love it.”

That appreciation for work is something he absorbed from his parents, who moved to the United States from China with just $40 when he was five years old. His father graduated from Notre Dame Law School and runs his own firm, and his mother runs an auto parts distribution business.

“When I was a kid, we would be at the dinner table, and both my parents would be on phone calls, and I would be sitting with my sister, just bored, but now I understand,” Wang says. “Jordan and I will typically scramble for lunch and we’ll scarf down a meal at 3:15 in five minutes and that’s all we have time for, pretty much. I totally get it now. I usually work, we’re here during the day, what I do is I grab a quick meal, relax and unwind for maybe an hour, and then I get on the phone with Italy and China because that’s when they’re up. Even if I don’t love it at the moment, once I get to take a couple steps back, I’d rather be doing this than anything else.”