He rarely hugs his children. He certainly won’t hug his friends. And, to the best of his memory, he had never hugged his brother Art. That changed on April 7, 2017, a few minutes after 2 p.m.

Moments earlier, it had been just another day inside the small newsroom of The Storm Lake Times, the twice-a-week newspaper that John and Art have run together for nearly three decades. Their modest building at the corner of Railroad and Geneseo in Storm Lake, Iowa houses a hard-working staff of 10 (half of whom are Cullens), a friendly dog named Mabel, and, on that day, the recipient of journalism’s highest honor.

John didn’t know the Pulitzer Prize announcement was scheduled for that afternoon, but Art did. He watched the livestream on his computer, waiting for Pulitzer Prize Administrator Mike Pride to get to the Editorial Writing category as publications you’d expect to win Pulitzers were saluted: The Washington Post. The New York Times. The Wall Street Journal. The New Yorker.

And then it happened.

Art jumped from his chair, shouted an expletive—a fact that wouldn’t surprise anyone who has spent more than an hour in his company—and wrapped his older brother in a hug. 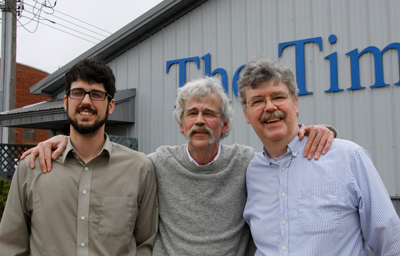 Tom, Art, and John Cullen '72 outside The Storm Lake Times

The surprising but unquestionably deserving honor for this tiny paper stands as a symbol of the enduring value and power of dogged accountability journalism. It also serves as a celebration of a 27-year partnership of two brothers committed to providing their hometown with a quality newspaper.

John and Art, who are seven years apart, both gravitated toward journalism in college. John credits the well-rounded education he received in Notre Dame’s Communications Arts department (which was renamed American Studies during his time on campus) with preparing him for a life in newspapers, while Art majored in journalism at the University of St. Thomas in Minnesota.

After graduation, John intended to go into television production but first planned to spend a relaxing summer back home in Storm Lake. His father, who owned a hardware store, had other ideas. “No son of mine is going to lay around this house without a job,” he said. John accepted a temporary job with the local newspaper, and by the end of the summer he was hooked.

He moved on to the paper in nearby Algona, where he eventually landed Art a job, as well. John left the industry for six years to serve as the assistant director of public relations at Buena Vista University, a small private college in Storm Lake, but his career shift didn’t take.

“I missed the newspaper business,” John remembers. “Missed having a forum. When I’m mad as hell and I’m not going to take it anymore, I wanted to be able to do something about it, and I couldn’t.”

He offered to buy Storm Lake’s existing newspaper, but they turned him down. Undeterred, John, with a two-year-old daughter and a newborn son at home, somehow convinced his wife that they should start their own paper. His first call was to Art, but his brother, who had recently started as an editor at the Mason City Globe Gazette, said the timing wasn’t right. “Plus, I think he probably figured that it was stupid to start a competing newspaper,” John says.

The Storm Lake Times published its first issue on June 29, 1990. By September, Art changed his mind and joined the cause. He took on the role of editor, overseeing the content of the paper, while John served as publisher, handling all the business operations. They still hold those titles today, although the Times has always been an all-hands-on-deck, family operation. Their wives both write for the paper, with Art’s wife, Dolores, doubling as a photographer and John’s better half, Mary, helping with billing and legal notices. Art’s son Tom is a news reporter and the paper's next generation.

From the beginning, the Cullen brothers operated differently than the typical small-town paper, valuing readership over profits. They prioritized what subscribers wanted most in a local newspaper and, breaking with common practice, didn’t charge for obituaries or wedding pictures. They were early adopters of key technological advancements and even installed their own printing press, with Art serving as the pressman and John running the label machines. “Our paper looked as good as USA Today, maybe better,” John boasts. Circulation quickly expanded from 1,800 to 4,000.

"When I’m mad as hell and I’m not going to take it anymore, I wanted to be able to do something about it."

More than anything, the quality of their journalism, with a harder, more serious edge than most small papers, has set them apart. Nowhere has this been on greater display than their editorial page, where over the years they have advocated on behalf of Storm Lake’s exploding immigrant population, successfully lobbied for a local water park, and picked fights with politicians and special interest groups they felt stood in the way of the public good.

“We have been able to have a positive impact on Storm Lake,” John says. “There’s a lot of good things that have happened that The Storm Lake Times has supported. Not that we claim complete credit, but we’ve lent whatever credibility and influence we’ve had to these projects.”

The Cullens rarely seek recognition for their work, eschewing award contests and journalism prizes. “I don’t need another piece of paper or a plaque,” Art says. The Pulitzer Prize, of course, is different. They decided last year that a series of deeply reported and colorfully written editorials merited consideration. The pieces, written by Art and largely reported by his son, exposed and excoriated the powerful corporate interests that through clandestine means were bankrolling the legal defense for three Iowa counties accused of failing to address pollution that was damaging the area's drinking water. For only the second time in the paper’s history, they submitted an entry for the Pulitzer. 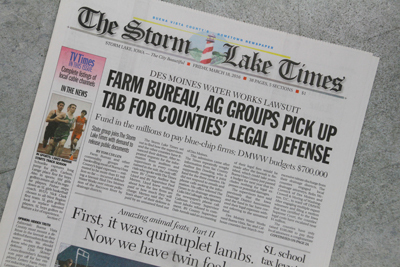 Their win has generated gobs of media attention, with outlets as wide-ranging as the Washington Post, Irish public radio, and a Japanese television station lining up for interviews. The honor hasn’t resulted in a spike in circulation, but it has given the Cullens some well-earned recognition and Storm Lake, a community of roughly 14,000, a reason to be proud.

John and Art don’t have too much time to celebrate. They still have a paper to run, and in the wake of the Pulitzer, Art has signed a deal to write a book examining the American heartland through the lens of Storm Lake. While Art works on the book, John has stepped in to handle some of his duties as editor. The older brother, who recently overcame some health scares, had considered retirement, but he doesn’t know what he’d do with his free time and he loves working with Art and the rest of the Times family.

“I’ll stay involved with the business as long as they’ll have me,” John says. “There will come a day when Art will say, ‘John, why don’t you go home and watch some TV today and don’t come back.’”

When that day comes, John thinks he’ll be fine with it. He knows he can walk away from the newsroom proud of the paper they built and confident in its future.

Just don’t expect him to give Art a hug on his way out.