Kevin Braun ’07, ’09 M.Ed. studied engineering at Notre Dame, but as graduation grew closer, his career plans began to shift. Thanks in part to a junior-year sociology course on education, teaching felt “more and more like a calling” to Braun. 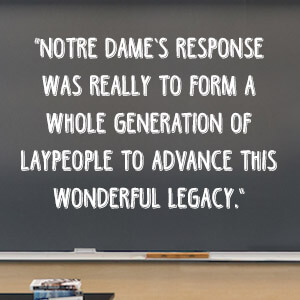 During his senior year — while he was serving as the Notre Dame Leprechaun — Braun was offered a job teaching math in Chicago through Teach for America. He also was accepted into the Alliance for Catholic Education (ACE), a two-year Masters degree program run by Notre Dame.

Like Teach for America, ACE sends recent college graduates into communities around the country to teach. But ACE participants also take graduate courses during the summers, and as the name suggests, their work focuses exclusively on Catholic schools.

ACE teachers typically live together during the school year. This community aspect of the program helped make Braun’s decision. “You know there are other people going through the same things as you are, and there’s always someone to talk to who will understand what’s going on in school,” he said.

Braun was placed in Bishop Dunne Catholic School in Dallas, which serves middle and high school students from a variety of backgrounds. After his two years in the ACE program, he stayed on at the school and now has been a teacher there for 10 years.

To Bishop Dunne, Braun brought not only his knowledge of math education, but also an optimism for Catholic education: qualities ACE has tried to instill in its students since it was founded in 1993.

“What they bring is enthusiasm, extraordinary talent, depth of topic and subject knowledge, a freshness of perspective, and deep training,” said Rev. Timothy Scully, C.S.C., ’76, ’79 M.Div., a co-founder of ACE.

Such qualities are crucial to Catholic education, which many say is undergoing a reinvention, both to prevent Catholic schools’ closure and to meet the needs of a changing society. Notre Dame, with ACE as well as research and policy initiatives and an army of alumni around the country, has been at the forefront of that reinvention for more than two decades.

In their heydey, Catholic school systems rivaled their public school counterparts. In their book Lost Classroom, Lost Community, Notre Dame School of Law professors Margaret F. Brinig and Nicole Stelle Garnett write that schools were an integral part of (often immigrant) Catholic neighborhoods. They became flashpoints in heated national debates such as the separation of church and state and the acceptance of Catholics in American society.

Notre Dame’s focus on primary and secondary education also declined. The University shuttered its department of education in 1976. “It wasn’t academically...aspirational enough to justify its continuation,” Father Scully explained.

But Father Scully believed Notre Dame, as a preeminent Catholic university, should still be involved in Catholic education. Along with Rev. Sean McGraw, C.S.C., ’92, ’00 M.Div., he started the Alliance for Education in 1993 with a $5,000 grant. It was the first Master's in Teaching program to focus exclusively on Catholic schools. One of the goals of ACE, Father Scully said, was to pick up where the religious orders left off.

“Notre Dame’s response was really to form a whole generation of laypeople to advance this wonderful legacy,” he said.

Since then, the program has grown to include several dozen faculty and staff. In addition to the flagship M.Ed — the ACE Teaching Fellows program — ACE offers a Master's degree in Educational Leadership for school administrators and certifications in STEM education and English as a new language. It has special programs meant to expand access to low-income and Latino students. It sends teachers to Haiti, Ireland, Chili, and Uganda. It partners with schools, dubbed “Notre Dame ACE Academies,” to revamp their curriculum in the interest of getting more students in the classroom.

“We’ve experienced nothing but grace upon grace,” Father Scully said.

Notre Dame’s involvement in K-12 education has grown beyond ACE itself. The Institute for Educational Initiatives, an umbrella organization that Father Scully heads, oversees ACE, as well as the undergraduate education minor and several programs focused on research and policy.

“We are just coming into our own in terms of having a robust research agenda that is responsive to the needs of the Catholic education sector,” said John Schoenig ’98, ’00 M.Ed., ’10 J.D., senior director of teacher formation and education policy at ACE.

Some of that research takes place through the Center for Research on Educational Opportunity (CREO), which studies how schools — not just Catholic — are organized and how students learn. Director Mark Berends, who spent his career studying school choice, said Notre Dame’s focus on Catholic education meant access to a range of sources.

For example, shortly after Berends arrived, he tried to map the achievement and growth of Catholic schools. He wanted local as well as national data, and he was able to use Notre Dame’s contacts around the country to get that data.

“It’s unbelievable in terms of the support of this University to do research on Catholic schools,” Berends said. “If I have a question about a certain diocese in Indiana, I can send an email out in the morning, and within like half an hour I’ll get five people respond.”

One of CREO’s current projects is surveying teachers and principals from Indiana schools of all types — public, private, charter, parochial — in order to measure their effectiveness.

“I think it’ll be really helpful for understanding not only Indiana but the nation as a whole,” Berends said.

Notre Dame graduates don’t have to go through ACE to become Catholic school teachers. Jeffrey Caballero ’01 M.T.S. came to Notre Dame to prepare to become a priest. He didn’t take Holy Orders, but at the suggestion of one of his Notre Dame professors, he took a job at a Marianist school in Florida and “fell in love with education.” He has taught high school theology for 15 years.

In that time, Caballero said, he’s witnessed firsthand the changes Catholic education has undergone: more of his students don’t have Catholic backgrounds, meaning he’s had to adapt the way he teaches theology. 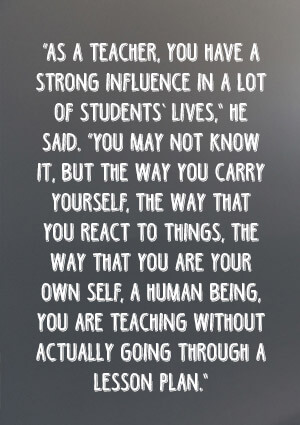 Caballero still visits Notre Dame often, sometimes with his students. He said the University is “setting the bar” for Catholic education.

“True Catholic education has to be a place where everyone is invited to share at the table academically and otherwise, everyone is invited,” he said. “Conscience formation has to do with that, has to do with not just segregating ourselves, saying we’re only inviting the people we like, the good Catholics. … Notre Dame sets up the example for us in the nation and even internationally. This is what true Catholic education does.”

But the flagship of Notre Dame’s educational initiatives remains ACE. By sending student teachers, training administrators, or providing funding or professional guidance, the program has had a presence in one in four U.S. Catholic schools, impacting 180,000 students in 70 percent of dioceses. It has granted 2,200 degrees or certificates and trained 2,021 teachers or leaders.

One of them is Lauren Hamilton ’15 M.Ed., who spent her ACE years teaching middle school science at St. Pius X Catholic School in Dallas. Hamilton said the program appealed to her because she would be able to bring her faith into her work.

“I had a really positive experience in it, the freedom it allows me in being able connect morals and morality in my education and not feeling limited in that way,” she said.

Like many schools, Pius X takes multiple ACE students at a time, allowing Hamilton to live with her fellow teachers and teaching her that education can be all-encompassing.

“Before ACE I thought of them as separate things, like teaching is one thing and living with your roommates, living within a community is one thing, and spirituality, your faith — they can all be thought of as separate. But by the time you’ve done ACE you can see how they relate together,” she said.

The community of ACE teachers has an impact on the schools as well. Of the more than 60 teachers at Bishop Dunne in Dallas, where Braun teaches, 11 are students or graduates of ACE. Three more are involved in other Notre Dame programs.

Douglas Wine, who became Bishop Dunne’s principal last year, said the yearly influx of ACE students makes the teachers skew young. He said they integrate well with the rest of the faculty, but they also bring a particular enthusiasm for what they do.

“Having been in all forms of education, sometimes the biggest problem with education are educators who can tell you why something can’t work,” Wine said. “Notre Dame folk believe it’s worth a try. … As someone who wants to make the school continually better, it’s a huge deal to have people who go, ‘Yeah, we can do that. Let’s go for it.’”

Some ACE teachers, like Braun, stay at their original placement schools. Others go elsewhere or work in other areas of education. Dallas Bunsa ’13, ’15 M.Ed. taught language arts at Bishop Dunne during his ACE years and now works in New Jersey, managing a blended learning program at two Catholic schools.

Bunsa said that during his ACE summers, he learned that Catholic schools can serve a wide spectrum of students — and that he himself had to be an example to those students.

“As a teacher, you have a strong influence in a lot of students’ lives,” he said. “You may not know it, but the way you carry yourself, the way that you react to things, the way that you are your own self, a human being, you are teaching without actually going through a lesson plan.”

Hamilton also left her ACE school; she currently teaches at Cristo Rey Philadelphia High School, which serves low-income, mostly non-Catholic students. One of them, she said, had been held back more than once and was still struggling in his classes. She worked with him in the mornings, at his own pace, until he did well on a test.

Stories like that, she said, remind her why she teaches — and why she chose Notre Dame for her own training.

It’s a mission, Father Scully said, that will continue far into the future.