When Alex Coccia ’14 was a child, he visited a Holocaust memorial on the east coast with his parents. He recalls seeing glass towers, made to look like smokestacks, etched with quotes from prisoners of internment camps. One little girl had found a raspberry somewhere in the camp where she was held and kept it safely hidden all day to give to another girl who had befriended her. The quote read, “Imagine a world in which your entire possession is one raspberry, and you give it to your friend.”

That moment, reading those words and thinking about their implications, stuck with Coccia throughout his childhood in Columbus, Ohio. Through an exciting fencing career with international travel and competition. Through brilliant academic success at Notre Dame with opportunities for study abroad. Through his leadership as student body president and abundant service and volunteer outlets. Through receipt of a Truman-Albright Fellowship toward a year in Washington, D.C. And now, halfway through his time as a Rhodes Scholar.

“I don’t have an idea yet what my specific job might be when I finish my educational pursuits, but I know what I want the conversation to be about."

Only the 16th Notre Dame graduate to receive a prestigious Rhodes Scholarship, Coccia will soon complete the first of two years’ study at Oxford University, where he’s earning a master of philosophy degree in comparative social policy. His possible next steps include Ph.D. programs at Oxford, law school back home, pursuing civil service to the people of the United States, or perhaps even running for elected office.

“I don’t have an idea yet what my specific job might be when I finish my educational pursuits, but I know what I want the conversation to be about,” he explains.

What truly distinguishes Coccia, though, is his willingness to be led in a particular direction. His path is guided by what he identifies as a consistent theme running through his recent steps.

“The mission of Notre Dame is to convert education into service toward justice. The mission of the Truman fellowship is to foster a sense of community toward public service. The mission of Rhodes is to fight the world’s fight. I want to be involved in progressive movement-building and policy-making that is inclusive and human services focused, around issues of economic and racial justice.”

Reflecting on his Notre Dame education and the Truman and Rhodes awards, he continues, “These aren’t just fun opportunities to grow. They’re certainly that, but they also carry responsibilities to be in service both to those who are experiencing them with you and also to broader communities, wherever they may be, who could benefit from what you’ve learned and experienced.” 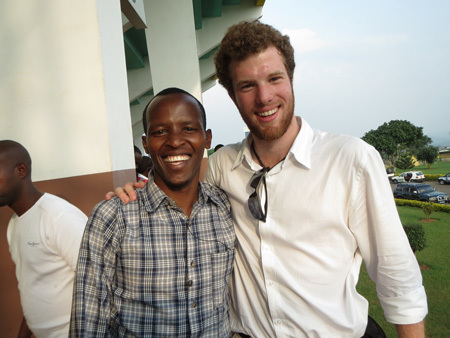 Coccia’s achievements and successes have never been about himself. In a very practical sense, he is an ally to and advocate for those whom Jesus identified as “the least of these.” He places intentional focus on gratitude and how best to return thanks – paying it forward and paying it back – to those who have enabled him to have such remarkable opportunities.

“What I’ve been able to do and accomplish is attributable to the people around me,” Coccia insists. “First, and most of all, my parents. They instilled in me the value of independent thinking and a sense of justice for marginalized people. Then there were so many passionate people at Notre Dame: other students in the peace studies and Africana studies programs who were doing really incredible things, and the professors who shared so much more than just their classroom knowledge. You might have a paper due the next day, but they’re taking time at three in the morning to talk to you about what’s really important to you and those around you.”

As an undergraduate, the significant issues Coccia addressed and advocated for included sexual assault prevention on campus, establishing institutional sanction of a gay-straight alliance at ND, mental health awareness, racial diversity, and accessibility for and hospitality toward low-income and undocumented students. His academic work influenced his ideas about conflict resolution and problem-solving, grassroots mobilization tactics, social movement theory, and systemic change for “the least of these” living in the United States today.

His post-graduation year in the nation’s capital involved cohort living with an intentional community at George Washington University and the opportunity to work directly with seasoned civil servants in the office of the Assistant Secretary for Planning and Evaluation under the auspices of the department of Health and Human Services. Struck by the interdisciplinary nature of policy-making among federal agencies, Coccia chose his Oxford program along the trajectory of his previous educational and workforce experiences.

“What I’ve been able to do and accomplish is attributable to the people around me.”

The path is not without fun and games. In addition to his heavy-hitting academic work, Coccia has also picked up a new, heavy-hitting athletic outlet. “I’ve been playing Australian-rules football for the Oxford team this year. It is the polar opposite of fencing,” he laughs.

Two years removed from graduation, Coccia offers his thoughts on what continues to unite Notre Dame graduates beyond the time spent on campus.

“We have an advantage and a responsibility, given our time at ND, especially when we think that politics is nasty or people are self-serving or systems are corrupt, to take a step back and remind ourselves of the fundamental question: Am I my brother’s and sister’s keeper? The most important thing for any of us is how we answer that question. We as ND alums can absolutely make choices to allow the trajectory of our whole lives to be in service of answering it affirmatively.”

It’s fundamentally the same question Coccia has been answering throughout his life. It’s been in the back of his mind since that day at the Holocaust memorial when he was confronted with another child’s incredible selflessness. It’s what led him to South Bend and to Oxford, and it’s what will ultimately guide him throughout his professional life.

Alex Coccia doesn’t know what he’ll do next, but you can bet on one thing: Whatever his occupation and the successes that will surely come, he’ll be motivated by a sincere desire to serve the least of these.