It's easy enough to spot Garrett and Betsy Busch at tailgates: They're the ones who bring wine.

It may not be the typical drink choice for tailgating, but not much about the Busches’ lives is typical. Together, the husband and wife team run a small Napa Valley winery called Trinitas Cellars.

The two Notre Dame alums met the first week of Betsy’s freshman year. She attended a dorm party that Garrett, a sophomore, was hosting. "I liked to host parties at school,” he says, “and now I do it for my job.” 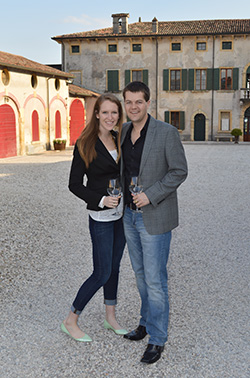 Garrett’s parents, Tim and Steph Busch, founded Trinitas in 2002. The Busches started taking trips to Napa from their Orange County home in the 1980s, and fell in love with the area and the wine business. Garrett hadn’t planned on going into the wine business after school. But after getting his M.B.A., his parents hired him to help with the winery, which was struggling financially.

He made a business plan and ultimately agreed to manage Trinitas on an interim basis. He ended up staying on as manager – and the winery has turned around with him at the helm.

"I've been learning everything I can about it, kind of on the job training since then,” says Garrett, who is now focused on growing the business and getting more exposure. “We’re doing some fun stuff, some unique stuff, we’re making good wine, and we’re having fun doing it.”

Meanwhile, Garrett and Betsy got engaged, and she started working at the winery full-time last year. "We came to the conclusion that there's a lot of work to do up here and a lot of my skills are definitely relevant to the needs that we had," she says. The transition was a big adjustment for Betsy, who had never worked for a small business before – or a winery. She took some wine classes and learned, as Garrett had, on the job. “I drank a lot of wine in the process," she laughs.

When the couple got married in June, they held their wedding reception at the Meritage Resort & Spa, the Busch property where the Trinitas tasting room is located. And Garrett had a wine-related surprise for Betsy at the wedding. It was the first time Trinitas had made a sparkling wine, which they were releasing the same month. They were calling the wine “BB,” short for “Busch Bubbles.” But at the wedding, Garrett made a toast where he dedicated the wine to Betsy, welcoming her to the family as “Betsy Busch.”

It wasn’t the first time Trinitas used wordplay in a wine name – though the names are usually of a religious nature. Trinitas is the Latin word for Trinity, and the Busches have integrated Catholicism into their business. “There's a strong faith-based thread through the winery,” says Garrett. They make a rose wine called "Rose’ary," and a white blend called "Psalms." They have particularly gotten some attention for their pope-specific wines, a tradition they started in 2006 with a zinfandel called "RatZINger" for Pope Benedict XVI. Tim and Steph Busch presented the wine to the Pope during their annual April trip to Rome.

Garrett recalls his father calling him shortly after Pope Benedict retired in February 2013, reminding him that they’d need a new wine for the new Pope, whom he and his wife would see on their April trip.

"I'm like dad, you own this winery, you understand how this works,” Garrett recalled. “I can't invent a wine in 30 days." But Garrett did already have a wine in mind for Pope Francis – a Cabernet Franc called CABERNET FRANCis.

"That was even easier than RatZINger to come up with," he says. The wine was still in barrel this April, but Trinitas’ winemaker and Garrett went and hand-bottled a case for his parents’ trip to Italy. “I was sitting there at my kitchen table hand-labeling bottles, and then it hit me, ‘This is really weird, I’m making something at my kitchen table that’s going to end up in the Pope’s hands next week.’”

Just another day in the wine business for Garrett and Betsy.

Running a company (and sharing an office) as a couple has its challenges – but Garrett and Betsy agree it’s working well for them. "I think originally Betsy was a little nervous," Garrett ventures. "We do things differently, but I think we're very cognizant of the ways that we differ," adds Betsy. "We're not afraid to play devil's advocate with each other," and push each other, she says. Garrett also notes that working in the family business is very consuming, and that they’d see much less of each other if Betsy were working elsewhere.

“We’re glad we’re a team, and doing this together,” he says.