Guided By A Saint

It was Sunday, Sept. 4, and at Terry’s parish in San Jose, each Mass attendee was given this specially made keepsake honoring the Catholic Church’s newest saint, who had been canonized in Rome earlier that day. Looking at the card, Terry knew he had to send one to his brother, Bob Chou ’61, ’63 M.S., in Louisville.

Few in the church understood the special significance it held for him. It’s not a story he shares that often. But if not for the woman on that prayer card, Terry would not have been sitting in that pew.

Nearly 60 years earlier, before her international acclaim, St. Teresa of Calcutta teamed up with a kind Congregation of Holy Cross priest and changed the trajectory of Terry and Bob’s lives. And both brothers remain forever grateful.

“Without that, I’m not sure what I would be today,” Bob says. 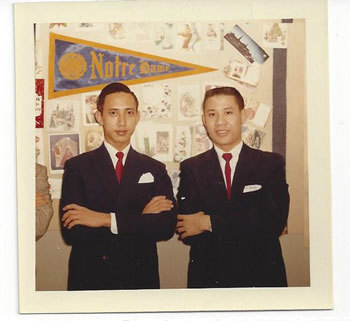 The Chou family moved to Calcutta in the early 1900s. Like many others, they had fled social and political strife in China in search of a better life. After arriving in India, Terry and Bob’s grandfather started a carpentry company and built a large factory that the family ran for generations.

It was inside this factory that Terry, working with a machine at just 8 or 9 years old, had one of his earliest interactions with the caring young nun whom the world would later come to know as Mother Teresa. “She came over and patted me on the head and said, ‘Be careful,’” Terry says. “As long as I was working around all those machines, I remembered that.”

Mother Teresa became a regular presence at the factory and inside the Chou home. The boys’ father was a charitable man and, although he was a Buddhist, he often allowed Catholic missionaries to use his company’s trucks and manpower to transport goods to those in need. He frequently offered aid to Mother Teresa, who developed a close friendship with the family.

On one evening in March of 1957, Mother Teresa arrived for dinner at the Chou home with Rev. Bill Evans, C.S.C., ’41, who was on his way to the Congregation of Holy Cross mission in Bangladesh. Mother Teresa would often come over with missionary priests, trusting they would receive a good meal and friendly conversation from the Chous. For Terry and Bob, this dinner would prove to be more memorable than any of her previous visits.

At the time, their father was trying to decide where to send his sons to college. One year apart, the two boys had already graduated from St. Vincent’s High School, a Christian Brothers school, and they had been slated to attend Loughborough College of Technology (later Loughborough University), a top engineering school in England. But when fighting broke out over the control of the Suez Canal in late 1956, their father decided not to send them to England because he worried they could get conscripted into the army. Instead, they started evaluating schools in other European countries.

Mother Teresa was aware of the family’s dilemma and suggested an alternative: Send the boys to Father Evans’ alma mater, the University of Notre Dame. “I think she felt that, being a Catholic school, it was a choice to be considered,” Bob says. 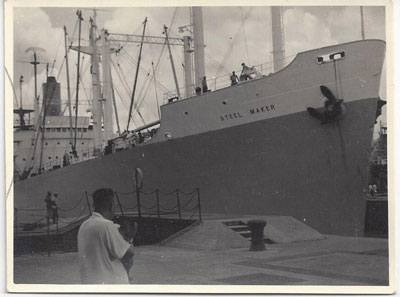 Initially, their father wasn’t interested. The United States seemed so far away, and he had never heard of Notre Dame. But Father Evans spoke so highly of the school that by the end of the dinner, they had persuaded him. Mr. Chou asked Father Evans to write to Notre Dame and have the school send them application materials. A few months later, Terry and Bob boarded a freighter ship bound for the United States.

The ship sailed south from Calcutta, around Sri Lanka, and through the Red Sea and the bombed-out Suez Canal. They passed through the Mediterranean Sea and into the Atlantic Ocean, arriving in Jacksonville, North Carolina one month after they left India. Father Evans had arranged for one of his fellow Holy Cross priests, Rev. Alfred Neff, C.S.C., ’36, to drive down from Washington, D.C. and meet them.

Father Neff attempted to check into a hotel with the boys, but on their first evening in America,  they were turned away because of their dark skin. The priest reached out to Linus Pottebaum, a Marine Corps officer stationed in Jacksonville who had attended Notre Dame during World War II through the V-12 program. Pottebaum knew Father Neff from his time on campus, and he gladly welcomed the group into his home for the night. Two days later, Father Neff dropped off the boys, neither of whom had previously left India, on campus and returned to Washington, D.C.

“We didn’t know zilch about Notre Dame or America or anything,” Bob says. But the Chou brothers adjusted quickly. They threw themselves into their studies, with Terry majoring in mechanical engineering and Bob majoring in electrical engineering. They worked a variety of jobs to pay for their educations: washing dishes in North Dining Hall, waiting tables in Corby Hall, and refilling vending machines throughout campus.

“When they put their noses to the grindstone, look out,” remembers Jim Hilliard ’59, who met the Chou brothers while working at the dining hall and became close friends with them. Near the end of their freshman year, Terry and Bob accepted an invitation to go to Chicago to spend Easter break with Hilliard’s family. It soon became their home away from home. Hilliard’s father helped them find summer jobs in Chicago, and Terry and Bob spent their vacations living with the Hilliards.

“My parents loved them,” Hilliard says. “They were good kids.”

While Terry and Bob were growing more comfortable in America, the plan was to earn their degrees and then return to Calcutta to help their father run the family business. World events once again interfered. As tensions escalated between India and China in the lead-up to the Sino-Indian War, life became harder on the Chinese population living in India. Their father advised his sons that the timing wasn’t right for a return to India, and they had to find work in the United States.

After completing their degrees, they both accepted jobs and went on to highly successful careers as engineers. While at Notre Dame, they also found their future wives. Terry met Phoebe at a campus dance, while Bob met Cecilia during a summer break in Chicago at an event for young Catholic Chinese students. (Bob and Terry had converted to Catholicism during high school. Most of their extended family eventually converted as well, thanks largely to the influence of Mother Teresa, and many relatives eventually followed them to the United States and Canada.)

Between them, Terry and Bob sent four children to Notre Dame. Bob and his children established the Chou Family Scholarship, which benefits Notre Dame students of Chinese heritage in need of financial assistance. The brothers love Notre Dame and all the opportunities the school afforded them. 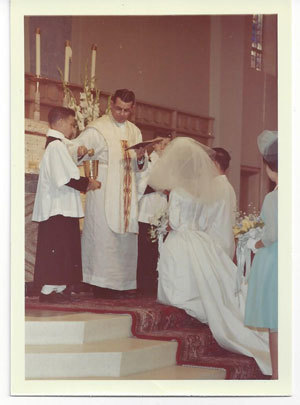 That’s why they remain so grateful to the people who helped make their improbable journey to campus a reality. It’s why both men still speak reverently of Father Evans. While he devoted his career to the Holy Cross cause in Bangladesh, he remained in touch with Terry and Bob, whom he had only met that one night over dinner, through letters. He even returned to the United States to officiate Bob’s wedding. But that joyous occasion was the last time they saw each other; Father Evans was murdered in 1971 by militant extremists in Bangladesh.

It’s also why Terry needed to get an extra card honoring the Church’s newest saint and why Bob’s voice fills with pride when he says, “St. Teresa of Calcutta.” Her canonization has given them another reason to look back fondly on that fateful night in 1957 when she brought a kind, generous priest into their home and changed their lives forever.

“Just that evening it happened to be a Holy Cross priest,” Bob says. “God had to have something to do with that.”