In 1980, a young doctor treating infectious diseases at a Seattle hospital noticed a troubling trend among some of his patients. An increasing number of gay men came in with unusual and unexplained infections. “No one in this country knew what was going on,” the doctor remembers. “But it was clear something was.”

A year later and more than 2,000 miles away, another physician was tapped by the Center for Disease Control and Prevention to head up its task force investigating the same mysterious and deadly condition. “We didn’t know what caused it,” he recalls. “It seemed to be rapidly increasing.”

Dr. Thomas Quinn ’69, ’70 M.S. and Dr. James Curran ’66 have been on the front lines of the battle against AIDS from the beginning. They have dedicated their careers to helping those suffering from an epidemic that has taken more than 39 million lives over the last three and a half decades. Thanks to their work and that of their colleagues, great progress has been made, but HIV/AIDS remains a leading cause of death worldwide.

And Quinn and Curran continue the fight. 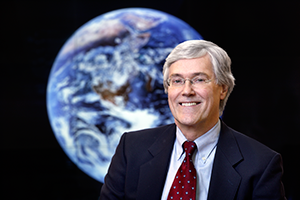 Thomas Quinn had no shortage of role models. Interested in biology as a high school student in Westchester County, New York, Quinn would shadow his uncle, a physician in private practice, to observe what it was like to diagnose and treat patients. Following in his uncle’s footsteps, as well as his father’s, Quinn decided to attend Notre Dame.

In South Bend, he found a new mentor in Professor George Craig. Quinn, a Preprofessional Studies major, took several classes with Craig during his junior and senior years, becoming fascinated with tropical medicine, which is now commonly called global health. “He was the most influential teacher I had at Notre Dame,” Quinn remembers. “I got really taken up by his enthusiasm and said, ‘This is what I want to do.’”

After finishing his undergraduate studies, Quinn earned a Master’s degree while studying under Craig at Notre Dame. He attended medical school at Northwestern University, further developing his interest in infectious diseases, especially those prevalent in tropical locations. Quinn returned to his home state for his residency, training in internal medicine at Albany Medical Center.

Quinn then received a fellowship to study infectious diseases at the National Institute of Health (NIH), the federal agency devoted to biomedical research. For two years, he worked with one of the world’s leading authorities on malaria, but Quinn wasn’t ready to work in a lab for the rest of his career.

“I realized if I was going to be any good in this field, it had to be more than just research,” he says. “I needed more clinical skills.” He moved to Seattle to oversee a clinic at the University of Washington Medical Center for refugees from Vietnam, many of whom suffered from malaria.

At the same time, Quinn started seeing gay men admitted to the hospital with “bizarre” infections. “I was so overwhelmed with curiosity,” Quinn says. “What is this? And how can I help these people?”

Tapping into his tropical medicine expertise, Quinn led an NIH team on a trip to Haiti after reports surfaced of an outbreak in that country. The group determined that AIDS was being transmitted through heterosexual sex, and they documented how rapidly the disease was spreading in Haiti.

Watching so many infected patients die within just months, Quinn decided to devote as much of his energy as possible to this growing health crisis. 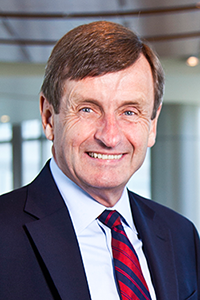 James Curran knew he wanted to be a doctor as far back as high school. Growing up in Dearborn, Michigan, he admired his family physician and hoped to make a difference as an adult. “I was interested in the combination of science and community,” he says.

That interest blossomed at Notre Dame, where Curran combined his major in Preprofessional Studies with coursework in philosophy, economics, and sociology. After attending medical school at the University of Michigan, Curran accepted an opportunity to work at the Center for Disease Control and Prevention (CDC), the federal agency devoted to containing the spread of dangerous diseases.

Curran rose through the ranks, becoming the chief of research into sexually transmitted diseases at the CDC. In June of 1981, he was working on vaccine trials for Hepatitis B when he was assigned to handle the CDC’s earliest inquiries into the condition that would eventually become known as AIDS. Just days after he received his assignment, the CDC published its first report detailing the cases of five previously healthy gay men whose immune systems had failed for unexplained reasons.

As more and more cases popped up, the CDC established a task force to focus solely on AIDS, and Curran was chosen as its leader. He and his team studied the spread and effects of the disease among different populations of gay men. Quinn and other doctors from around the country who had treated these patients presented their findings to the task force. Soon, Curran and his staff realized women also were being infected. They quickly identified how the disease was spreading -- sexual contact, intravenous drug use, from pregnant women to their babies -- and began educating the public about the risk factors well before the HIV virus was even discovered.

“Knowledge came very, very quickly,” Curran says. “We knew how to prevent the disease even before we knew what caused it.”

But the numbers of those infected and the death toll rose at a furious pace, as researchers scrambled to search for treatments. Over the next 15 years, Curran would oversee the efforts to halt the disease’s momentum from his post at the CDC.

No place in the world has been more devastated by HIV/AIDS than Africa, and the medical community realized early on how vulnerable many parts of the continent were to a massive outbreak. In 1983, the NIH and the CDC, along with Belgium’s Institute for Tropical Medicine, launched Projet SIDA, a collaborative investigation into the spread of AIDS in Zaire (now the Democratic Republic of the Congo). The NIH and the CDC each appointed a principal investigator to oversee the project: Quinn and Curran, respectively.

“It was the first and largest HIV research project in Africa,” Curran says. The two Notre Dame graduates would meet in Africa and the United States several times a year, and they published many research papers together detailing the magnitude of the crisis in Africa.

Projet Sida emerged as one of the most influential AIDS research initiatives of the 1980s, but it was shut down in 1991 due to a civil war in Zaire. Its demise ended an almost 10-year collaboration between Quinn and Curran, but the two doctors continued with their individual work. Both remain among the most influential HIV/AIDS researchers in the country and have been decorated with numerous awards for their successes.

Quinn remains with the NIH as the associate director for international research at the National Institute of Allergy and Infectious Diseases. He directs the organization’s HIV/AIDS section, and has researched the virus in Kenya, Uganda, South Africa, Gambia, Tanzania, China, India, and Thailand. He oversees the agency’s infectious disease fellowship program at Johns Hopkins University. Quinn also serves as the director of Johns Hopkins’ Center for Global Health and as a professor at the university’s renowned medical school.

After ascending to the post of assistant surgeon general, Curran ended his 25-year career at the CDC in 1995 to join Emory University, where he serves as dean of the Rollins School of Public Health and the director of the Emory Center for AIDS Research. He oversees a team of 120 faculty members who work on HIV/AIDS, exploring drug treatments and other innovations. “It remains a very important and exciting area for research and patient care and prevention,” Curran says.

The Age of Optimism

Thinking back to 1981, Quinn and Curran both tout how far the medical community has come in its understanding of and ability to treat HIV/AIDS. The first semi-effective drug was introduced in 1987, and the presence of multiple antiretroviral drugs now allows many HIV patients to live relatively normal lives.

“Today, you don’t have to die from AIDS at all as long as you get diagnosed early and get into treatment early,” Quinn explains. Because of these huge strides, Quinn refers to the current period within the larger history of the battle against HIV/AIDS as the “Age of Optimism.”

Despite all the advancements, more progress is needed. More than 30 million people around the world are living with HIV/AIDS, and researchers have not yet developed a drug to cure the virus or a vaccine to prevent infection.

For their parts, Quinn and Curran will keep fighting. “The job is far from done,” Curran says.