Who Is Molly Lalonde?

“I was in class,” Lalonde, a nursing graduate student at the time, remembers. “And I was like, ‘Why is someone from California calling my phone?’”

Someone from California was calling to tell her she’d been selected to appear on Jeopardy!, the game show she has watched religiously since childhood. Luckily, her husband, Chris Lalonde ’06, picked up when the producers called him, and he immediately texted his wife.

A month and a half later, Lalonde could hardly believe it when she took the stage opposite Alex Trebek. “I always said I wanted to be on it, but I never thought it would actually really happen,” she says. And even in her wildest dreams, she never envisioned what would happen next. 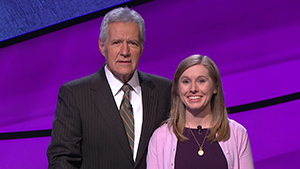 Lalonde grew up in Reno, Nevada watching Jeopardy! each night with her family. In high school, she captained the academic team for three years, leading the squad to a state championship. “I just love trivia,” Lalonde says. “I guess I’m a know-it-all.”

After graduating from Notre Dame with a degree in English, she spent several years at a healthcare software company before deciding she’d rather work directly with patients. Lalonde moved to Nashville and earlier this year completed a master’s degree at Vanderbilt University to become a pediatric nurse practitioner.

While in graduate school, Lalonde passed the online entrance exam for Jeopardy!, the first step in a laborious process to become a contestant on the show. A year later, Jeopardy! invited her to a casting call in Nashville, allowing her to audition in person.

Several months went by before she received — and initially ignored — that fateful call.  She had six weeks until she’d be flying to California, and it was time to prepare. “I got the weirdest assortment of books from the library you’ve ever seen,” Lalonde says. “I was cramming for a month and a half.”

At one point, all that studying seemed like it might not pay off. In her first game, Lalonde failed to even buzz in and attempt an answer for the first 12 questions.

“The buzzer was the hardest part of the entire game,” she says. “I was nervous about that, and I had every reason to be nervous about it because I was terrible at the buzzer. It’s harder than it looks at home.”

When a question is asked, contestants must wait for a light to go on before they can hit their buzzers. If a contestant rings in too quickly, she is unable to buzz in again for several seconds. Lalonde remained calm despite her early struggles, explaining later that she was thinking too hard to panic. “I feel like it’s one of those fight or flight situations,” she says.

By the 13th question, she had the timing down and correctly identified Kentucky as the birthplace of Abraham Lincoln. Lalonde took off from there, entering Final Jeopardy ahead of her two opponents. When Trebek read the clue, Lalonde could hardly contain her excitement. She knew the answer was the Statue of Liberty, and she had wagered enough to ensure her victory.

“My goal going into Jeopardy! was that I wanted to have enough money to play Final Jeopardy. I didn’t want to have negative dollars so that I couldn’t play. That was my baseline,” Lalonde says. “So I far surpassed my expectations in that first game.”

But Lalonde’s run didn’t stop there. She won her second game after cleaning up in categories like “Science Stuff” and “Pop Music.” In her third victory, the nurse practitioner recorded her first clean sweep of an entire category when “Glands & Organs” appeared in Double Jeopardy. “You sort of luck out sometimes,” Lalonde says. She really hit her stride in the fourth game. When the first round began, Lalonde looked at the board and thought that they couldn’t have possibly picked a better set of categories for her. She dominated throughout, entering Final Jeopardy with an insurmountable lead: Lalonde had $17,400 while her closest opponent had a measly $200.

Her episodes taped in February and aired in June, but Lalonde still can't put that final game and some of the questions she missed out of her head. “I will definitely remember that for the rest of my life,” she says. “Just like I remember the answer I lost the geography bee on in middle school.”

But she’ll also never forget the incredible feeling of winning that first game and all the excitement that followed. After years of dreaming of competing on her favorite show, Lalonde engineered a magical five-day run and walked away with $55,300 in winnings.

“Sometimes I can’t believe it happened,” she says. “Winning four was just insane.”