Back in the Defensive Backfield

Todd Lyght ’91 couldn’t take it anymore. He had never wanted to be a coach, but now he felt compelled. The team needed him.

And so, against his better judgment, the former NFL star came forward to volunteer his services. He was ready to coach youth soccer.

Lyght’s five-year-old son, Logan, had just started playing the sport in Las Vegas. None of the parents had stepped up to lead the team, so a mother with no prior soccer experience kindly volunteered to fill the role.

“After watching the first three games, I said to myself, ‘She needs some help,’” Lyght remembers.

He went to the overtasked coach with a proposal: Lyght would serve as her assistant and take over teaching the fundamentals of the game, and she would continue to oversee the administrative aspects of the job. Relieved, she gladly accepted, and Lyght’s coaching career was underway. 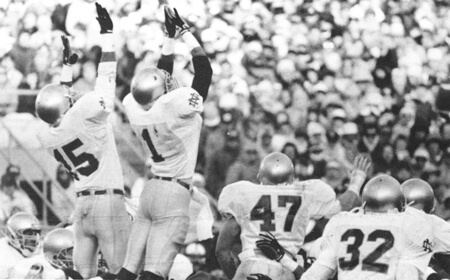 Seven years later, he’s still coaching, albeit on a slightly larger stage. Now the Pat and Jana Eilers Family Defensive Backs Coach at his alma mater, Lyght will be on the sideline on Sept. 4 when the Notre Dame football team opens its season at Texas. It’s a job he loves, but one he never thought he’d hold.

As a player, Lyght accomplished just about everything he could on the gridiron. A sought after recruit from Flint, Michigan, he bypassed Michigan and Michigan State for Notre Dame and head coach Lou Holtz. He starred in the secondary for the Irish, helping lead the team to the 1988 national title and earning All-American honors in 1989 and 1990. The Los Angeles Rams selected Lyght with the fifth pick in the 1991 NFL Draft, and he went on to earn Pro Bowl and All Pro honors and win a Super Bowl Ring.

Yet when he retired in 2002, Lyght was eager to move on from the sport. “I wanted to get away from football,” he says, “because I was a pretty committed athlete and had dedicated, up to that point, my whole entire life to the game.” Intent on starting a family with his wife, Lyght also hoped to find a new profession about which he’d feel as passionately.

He entered this next stage of life with a growing business already waiting for him. In 1996, just five years into his NFL career, he had invested in a fledgling pizza chain, Richie’s Neighborhood Pizzeria. Eventually, he and his business partners owned 25 locations in Florida, Texas, Utah, and California. Lyght eventually sold his stock for a profit, and moved on to his next project. He opened a restaurant and nightclub in Orange County, California. The business was a success, but Lyght still hadn’t found the right career.

He decided to give broadcasting a try, accepting a position as a football analyst for Fox Sports Radio. He appeared nationally on Saturdays and Sundays, commentating on multiple games as they were going on, but after a few years, he decided it wasn’t for him. “I didn’t want to be a pundit,” he says.

It was around this same time that he began coaching Logan’s soccer team. “I really started getting into it and just having a blast with it,” he says. His wife saw how much fun he was having and suggested he consider coaching football. Lyght still wasn’t sure he wanted to return to the game, but he figured he owed it to himself to give it a try.

Through a friend, he approached the head coach at Bishop Gorman High School, the local powerhouse in Las Vegas that produced former Notre Dame star Ronnie Stanley '16. The coach offered Lyght the opportunity to serve as the defensive coordinator for the school’s JV team. That lasted only a few days. Lyght was a natural, and the head coach swiftly moved him up to varsity to coach defensive backs.

“The first day I stepped on the practice field at Bishop Gorman, I knew that this is what I wanted to do the rest of my life,” Lyght says. “And that was a really good feeling for me because I had kind of been searching all this time for what was going to be my love, and it came back to football, which was my first true love.”

After two seasons at the high school level, he went to the University of Oregon to work as a defensive intern on Chip Kelly’s staff. He didn’t make much money, but he soaked up as much knowledge as he could. “Even though you’re a great player on the collegiate and the pro level, you still kind of have to earn your stripes as a coach,” Lyght says. Two years later, he followed Kelly to the NFL and the Philadelphia Eagles, where Lyght served as the assistant defensive backs coach. 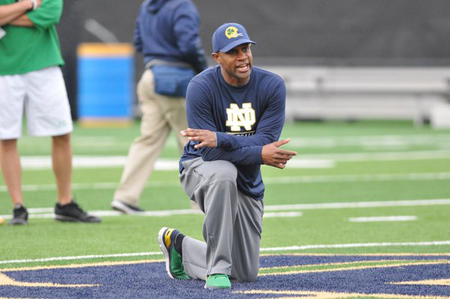 Following the 2014 season, Lyght, wanting to be in charge of his own position group, accepted a job with Vanderbilt University to be the defensive backs coach. A few weeks later, Kerry Cooks, Notre Dame’s secondary coach, left for Oklahoma, and Lyght received a call. Brian Kelly wanted him to come home to his alma mater.

What followed was one of the most difficult three days of Lyght’s life. He didn’t want to walk away from his commitment to the Commodores, but this was Notre Dame. Since his first day at Bishop Gorman, in the back of his mind, Lyght had hoped that one day his coaching journey would bring him back to South Bend.

“I couldn’t pass up the opportunity to come back to the University of Notre Dame,” he says. “I just couldn’t.”

Now heading into his second season with the Irish, he’s glad he didn’t. Lyght loves working with Notre Dame’s student-athletes, helping them to improve as players and to become better men off the field. He’s determined to cut down on the explosive plays that plagued the defense last season and produce a championship-level defensive backfield.

“We’re going to be a young secondary, but we’re talented,” he says. “And we’ve got guys that can make plays.”

Someday, Lyght would like to be a defensive coordinator. He can even see himself as a head coach down the road. But for now, he’s exactly where he wants to be. The years of searching for his next career, from the pizza chain and the nightclub to the radio broadcasts, have led him back to football and the school he loves. More than anything, Lyght wants to be a part of bringing Irish fans their first national championship since his own playing days

“Being back in the Stadium as a coach and helping our team and our guys win ball games, it’s a dream come true for me.”