Return of the Rushing King

Like many Floridians during the glory years of Bobby Bowden, Notre Dame running backs coach Autry Denson ’99 grew up a diehard Florida State fan. He recalls vividly the “Game of the Century,” when the Fighting Irish ruined his Seminoles' hopes for an undefeated 1993 season. A high school junior at the time, Denson was verbally committed to join Bowden’s program in Tallahassee, and South Bend was the furthest place from his mind.

After one conversation with Lou Holtz, however, everything changed. 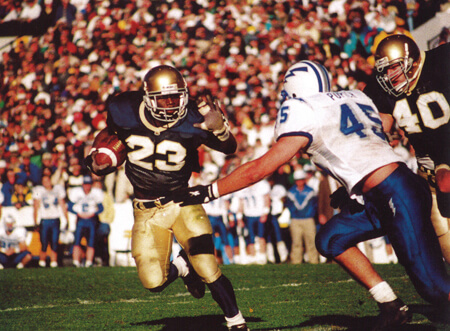 "He’s the only coach out of every school I talked to that didn’t talk about football only," Denson says. "He talked about life. He talked about how Notre Dame was different. That resonated with me.”

That meeting with the Irish head coach convinced Denson to visit campus. While in South Bend, cornerback Allen Rossum '98, who also hailed from a state with numerous college football powerhouses, helped him recognize that Notre Dame was the best option for his future.

His college decision became a no-brainer. And those same qualities that convinced him to come to Notre Dame in the first place attracted him back to campus after two decades and several different stops along the way.

Denson arrived at Notre Dame in the fall of 1995. Four years later, he departed as the program’s all-time leading rusher with 4,318 yards, a mark that still stands today.

"The only goal I had when I got into coaching was to be obedient to God and go wherever he took me,” Denson says. 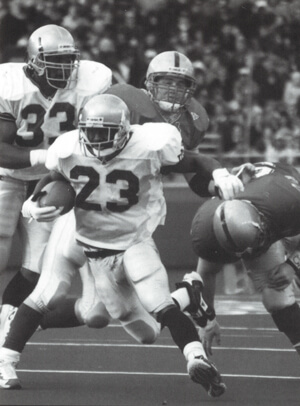 That faithfulness led Denson to a volunteer coaching position at Bethune-Cookman, a small FCS program in Daytona Beach. After three years with the Wildcats, he accepted an opportunity at Miami University in Ohio, alongside head coach Chuck Martin, Notre Dame’s former offensive coordinator. The following season, Denson departed for a role closer to home at his wife’s alma mater, the University of South Florida. He made the decision with some trepidation, however, as it came amid rumors that the USF staff’s job security was in jeopardy following two subpar seasons.

Weeks after joining USF, on the same day his family’s belongings arrived in Tampa, Denson received a call from Notre Dame. This time, there were never any doubts. He and his wife, Elaine, moved their family for the third time in eight months.

Now on the cusp of his second season back at Notre Dame, Denson says he is “like a kid in a candy store.”

“I’m more excited for my children,” he says. “They bled ND because of me for years, and now they get to experience firsthand how special of a place it is.”

Earlier this summer, Denson completed a Master of Arts in Christian Leadership program through Liberty University, a degree he had been working towards since his time at Bethune-Cookman. Now more than ever, he is focused on football and mentoring the young men who sit in the same seats that he once occupied. 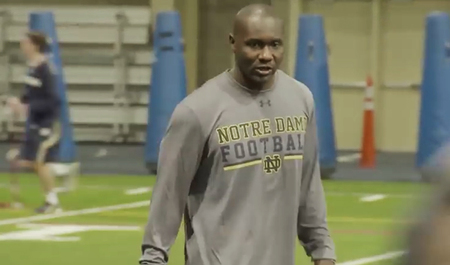 Despite his successes, the 2016 season will be only Denson’s seventh year as a football coach at any level. When he’s not striving to perfect his craft, Denson seeks to continue building community among an already close-knit core of running backs.

Whether it’s organizing Easter Sunday with his family, a Thursday night at the bowling alley, or a service event in the South Bend community, he believes strongly in ministering to his student-athletes both on and off the field. Just like Holtz more than 20 years ago, Denson recognizes that Notre Dame is about so much more than the game played on Saturdays in the fall.

“If we just develop you as football players, we have failed,” he says. “That’s not why you come to ND.”