A Young Priest in Detroit 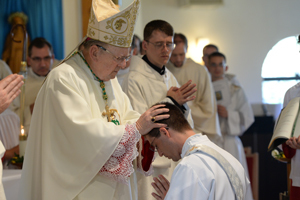 The Archdiocese of Detroit doesn’t sound like the obvious place for a young priest from the Cayman Islands to end up.

But for 30-year-old Rev. Joseph Kirkconnell '06 – the first-ever Catholic priest to hail from the Cayman Islands – it’s a natural fit.

The Cayman Islands are a British Territory, which the Saint Ignatius Parish’s website points out makes the Archdiocese of Detroit the only United States Diocese to drive on both the right and the left sides of the road.

For Father Kirkconnell, religion was always a big part of life growing up in the Cayman Islands. “From as far back as I can remember, I've always had a great relationship with the Lord,” he says. His parents have always been involved with the church and the family prayed together at night before bed. Father Kirkconnell attended Catholic school beginning with kindergarten, continuing all through high school.

And their pastor had a close relationship to his family, coming to his house weekly to play cards with his parents and another friend. While Father Kirkconnell only remembers a handful of longer conversations with the pastor, in retrospect he realized the influence the pastor’s frequent presence had on him.

Father Kirkconnell has three brothers. He says his mom always told them to be open to the priesthood – and that whatever was God’s will would make them happiest in life.

"It was something that was always a possibility, I was open to it, and in prayer I told the Lord if you want me to do it, I will, but you have to let me know or help me,” Father Kirkconnell explains.

During Father Kirkconnell’s senior year of high school, the pastor passed away, and he cites the funeral as a key moment in his journey toward deciding to become a priest. "I just remember being at his funeral and the church was completely packed, seeing how many lives he affected and touched and brought to the Lord, or helped in their journey of faith,” he recalls. “It inspired me to think about it more, and pray about it more deeply.”

When it came time to choose a college, Notre Dame felt like a perfect fit to Father Kirkconnell: He wanted a Catholic school, but also wanted to attend a school with strong academics and athletics. So following his older brother, he headed north to Notre Dame.

He continued to think and pray about the possibility of becoming a priest throughout his time on campus. He singles out a moment during his college experience, while he was at the Basilica of the Sacred Heart: “As I was praying before Mass – it wasn't an overwhelming experience or anything like that, just a subtle thought that I should be a priest."

When he graduated in 2006, he still wasn't quite ready to make the decision, so he enrolled in Notre Dame’s two-year Echo program, obtaining his Master’s in Theology in 2008. During the course of the program, he worked in the Diocese of Wilmington, Delaware. "Just being in the parish, seeing what a priest does, really helped me to get a better sense of what it was like," he says.

Father Kirkconnell went on to study at Sacred Heart Major Seminary in Detroit for six years. "Ever since I entered the seminary, my desire to become a priest only increased,” he says, noting that there are struggles, but that’s just “part of growing your faith."

He was ordained Cayman’s first Catholic priest in May, at a ceremony at St. Ignatius Church witnessed by hundreds and broadcast on Cayman radio and TV. He was assigned to Cayman for a short time, and then moved on to his current post as associate pastor at St. Paul on the Lake in Gross Pointe, Michigan. Father Kirkconnell has been enjoying getting to know the community, which he says “really is like an extended family.”

Father Kirkconnell has some words of advice for young people thinking about becoming priests.

“The one thing I would just say is it is an amazing life,” he says, noting that in this culture, “I think people are discouraged from even thinking about it or being open to it. And if it is God's call, if that's what he's created you for, if it is your vocation, it really does bring a great joy.”

“It's just like any vocation, whether it's a mother or father, husband or wife, you have challenges there too and you have to make great sacrifices for your family,” he continues. “So I think they mirror each other in that sense. They may be different sacrifices, but you still have to give up yourself. That's what love is about, really.”

Thus far, he certainly believes any sacrifices are well worth it.

"Being a priest gives me great joy,” says Father Kirkconnell. “It's been wonderful so far."