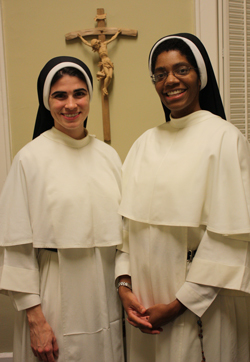 Natalie Martinez ’06 and Paige Courtney Barnes ’06 never met at Notre Dame, but they had a lot in common during their days on campus.

They passionately threw themselves into their studies and enthusiastically embraced the communities of their dorms. They demonstrated their musical talents -- Martinez as a singer in musicals and the folk choir and Barnes as a cellist at Cavanaugh Hall masses. They loved studying abroad in Europe.

Most significantly, these two young women felt the call to serve God during their time as Notre Dame students. By answering that call, they’ve ended up in the same community once again.

Sister Michaela Martinez, O.P., and Sister Hannah Barnes, O.P., are members of the Congregation of St. Cecilia, a group of Dominican sisters based in Nashville, Tennessee. The two young alumnae live in the St. Cecilia Motherhouse in downtown Nashville, and they both teach at St. Cecilia Academy, an all-girls high school run by the Nashville Dominicans.

For these two sisters, the path to vowed religious life can be traced to their separate families and their shared University.

Looking back, Sister Michaela remembers feeling drawn toward the sisters that worked in her first childhood parish, when her family lived near Dallas. “I did always have a sort of magnetic attraction to the sisters,” she remembers. “I guess the seed was planted when I was very young.”

Her family soon moved west to Lubbock, where sisters were in short supply. But Sister Michaela grew in her faith thanks to her devout Catholic family. They attended Mass together every Sunday, and her parents demonstrated to their children how central their religion was to their lives. Sister Michaela’s father even became a deacon when she was in college.

There was no Catholic high school in the family’s diocese, so Sister Michaela attended Trinity Christian High School. She said questions from other students about Catholicism strengthened her devotion. “I guess I kind of claimed my faith as my own,” she says.

In her senior year at Trinity Christian, Sister Michaela decided to do a senior research paper on sisters -- mainly to “ruffle the feathers” of some her classmates, she admits. Whatever her intention, the paper proved pivotal in the ultimate direction of her life. She interviewed sisters from around the country. She reached out to one convent after finding the telephone number on the back of a CD case of spiritual music that belonged to her grandmother. It was the Sisters of Saint Cecilia, and Sister Mary John proved very helpful for her paper.

A few months later, on her first day in her freshman theology class at Notre Dame, Sister Michaela struck up a conversation with the boy in the next desk. He had an aunt who was a Dominican sister in Nashville – Sister Mary John. During the next few years, when Sister Mary John and some of her fellow Nashville Dominicans would visit campus, Sister Michaela would often visit with them.

“So suddenly the sisters were back on my radar,” she says.

Sister Hannah’s story begins with her mother, Marilyn. Growing up in Simmesport, Louisiana, Marilyn was raised a Baptist. But her parents, wanting the best possible education for their children, sent her to a Catholic boarding school run by the Sisters of the Holy Family. Marilyn fell in love with the Catholic faith and converted.

When she had children of her own, she attempted to pass on her faith, taking them to daily Mass. “I remember her lining up my siblings and me in a pew after Mass and teaching us the Memorare line by line,” Sister Hannah says. “My mom just kind of instilled in all of us a deep faith from a young age.”

In Sister Hannah’s case, it took. By her senior year at a public high school in Nashville, Sister Hannah said she had “such a hunger” to go to a Catholic college. Still, she had never even considered the prospect of entering religious life.

That changed after she enrolled at Notre Dame. She felt energized by the thriving spiritual community on campus. She took on the role of liturgical commissioner in Cavanaugh Hall, planning dorm masses.

Sister Hannah spent her entire sophomore year studying in Angers, France, an experience she cites as crucial in her spiritual development. “Notre Dame does such a fantastic job of placing the study abroad kids in a Catholic environment,” Sister Hannah says. “It wasn’t just studying abroad. It was like a spiritual pilgrimage for a year.” She also traveled to Rome and attended the last Easter Vigil Mass performed by Pope John Paul II.

“My heart was just set completely on fire with the faith,” she says.

Alone in a Chapel

While studying in Rome during the fall semester of her junior year, Sister Michaela took the advice of a priest and spent 15 minutes each day praying in the presence of the Blessed Sacrament. One day, alone in prayer in the chapel of Santa Maria in Trastevere, Sister Michaela felt God asking her to become a sister.

“I knew that the Lord was inviting me,” she says. “I also knew I didn’t have to say yes.”

She returned to Notre Dame determined to further discern her calling. She decided to go on a vocation retreat with a convent and, naturally, gravitated toward the Sisters of Saint Cecilia.

“I didn’t really know where else to start looking,” she remembers. “And when I came to Nashville, I fell in love with it.”

Initially, one of the things she most liked about Nashville was the large numbers of young sisters. There are roughly 300 sisters in the community, and the median age is about 36. But it was the elderly sisters that made Sister Michaela want to stay.

“The older sisters in the infirmary who had been here 80 years were saying things like, ‘There’s no place like St. Cecilia’s. You’ve come to the right place,’” she remembers. “I could see the joy in their eyes, and I could sense that these were women of God.”

She graduated from Notre Dame with a double major in Theology and English and a minor in Music. Three months later, in August 2006, she entered the convent.

As she neared the end of her time at Notre Dame, Sister Hannah found herself struggling with her own vocation. “I felt called to religious life, but I didn’t feel like I could do it,” she remembers. “That was kind of where I was senior year. I felt very clearly called, but I was just really scared.”

She sought guidance from Rev. Paul Doyle, C.S.C., ’65, ’75 M.Div., the rector of Dillon Hall. Father Paul often said Mass in Cavanaugh, where Sister Hannah served as liturgical commissioner, and the two had developed a close relationship.

Father Paul recommended that Sister Hannah pray deeply. He said she shouldn’t be concerned with whether or not she could do it but rather whether or not this was her calling.

“That was kind of the decisive moment,” Sister Hannah says. She took his advice, continuing to pray and open her mind to the possibility of a religious life. After graduating a semester early with a degree in Philosophy and a minor in French, Sister Hannah moved to Chicago. She found a job with a non-profit, where she taught leadership skills to inner city girls. She enjoyed the work but felt compelled to work more closely with the Church. She decided to move back to Nashville, where she taught theology at Pope John Paul II High School.

By 2009, Sister Hannah was moving closer to choosing to become a sister, but she didn’t know where to start. While she assumed she would ultimately enter a convent somewhere other than Nashville, she decided to go on a vocation retreat with her hometown convent, the Sisters of St. Cecilia, in May of 2009. Like Sister Michaela, she fell in love with the sisters, their mission, and their way of life.

“I almost felt like the Lord was making it completely obvious for me,” she says. Sister Hannah entered a year later, and she’s now just two and a half years away from taking her final vows.

Sister Michaela and Sister Hannah wake up each day at 5 a.m. They pray the Liturgy of the Hours, attend Mass, and eat breakfast each morning with the roughly 150 other sisters living in the Motherhouse. Their weekdays are spent at St. Cecilia’s Academy, where Sister Michaela teaches theology and English and Sister Hannah teaches English, although she’ll be starting at Frassati Catholic High School in Spring, Texas this spring. At night, there’s more communal prayer, dinner, an hour of recreation, a Salve procession, and some quiet time to grade papers and prepare lesson plans before going to sleep around 10 p.m.

Their families, Notre Dame, and their callings have led them to this life. They serve God and His Church as teachers, ministers, and mentors. And they love their work.

“It is such a beautiful, joyful life,” Sister Michaela says. “It’s far beyond what I could have ever expected.”

“The whole idea that my life is dedicated to spreading the Gospel, that’s my happiness,” Sister Hannah says. “It doesn’t get any better than that.”

These two classmates still have a lot in common.