This New Year’s Eve, a group of Notre Dame alumni and friends gathered in Phoenix to spend the day together. They had traveled, many of them clad in Notre Dame apparel, to Arizona to watch the Fighting Irish take on Ohio State in the Fiesta Bowl the following day.

But on this day, they had no plans to enjoy a few drinks, talk about the crucial match-ups in the big game, or sample the pizza at the renowned Pizzeria Bianco. Instead, this group of 80 Irish supporters washed feet, served food, and engaged with homeless people in one of the city’s poorest neighborhoods. 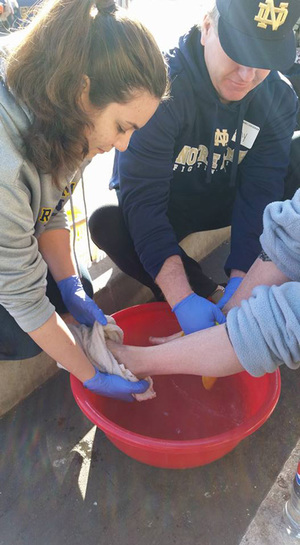 They were there for a Notre Dame Alumni Association service project with Andre House, a Congregation of Holy Cross ministry serving the local homeless population, and St. Vincent de Paul. The event was part of a continuing tradition: When Notre Dame football fans flock to a city for the Shamrock Series or a bowl game, the Alumni Association offers an opportunity to make a difference.

“Our goal is to give back to the communities that have so warmly welcomed us,” Alumni Association Executive Director Dolly Duffy ’84 says. “It’s inspiring to see so many of our alumni and friends so eager to volunteer their time to help the less fortunate.”

The event in Arizona was the second major service project organized by the Alumni Association this football season. On the Friday before the Shamrock Series game in Boston in November, a group of Notre Dame fans packed 37,000 pounds of fresh produce into more than 1,500 bags that were delivered to needy families in Boston in time for Thanksgiving. Jack Shields '83 and his wife, Kathy, generously donated turkeys to accompany the bags.

In previous years, the Alumni Association has supported different communities in need in cities around the country. From planting an urban garden to support the homeless in Miami before the 2012 BCS national championship to creating care packages for soldiers in Afghanistan during the Shamrock Series in New York, these events have made a measurable impact and offered rewarding experiences to the participants.

In Phoenix, the Notre Dame volunteers helped the homeless and impoverished in tangible, meaningful ways. Andre House, named for Saint Andre Bessette, C.S.C., was founded in 1984 by two Holy Cross priests hoping to offer hospitality and relief to the local homeless. The Notre Dame alumni, students, and staff members participated in many of the services Andre House offers, from doing laundry and working at Andre House’s clothing distribution store to washing the feet of homeless people who opted to receive foot exams from a medical non-profit on site. Many also went to nearby St. Vincent de Paul to prepare and serve lunch to hundreds of homeless patrons.

The following day, Notre Dame fell to the Buckeyes in a hard-fought contest. While Irish fans left Arizona disappointed in the outcome, the 80 volunteers who aided the homeless the previous day returned home knowing they had lived out Notre Dame’s mission by serving those most in need.

The next time you plan a trip to a Shamrock Series or bowl game, please consider joining your fellow alumni and friends at an Alumni Association service project.