Responding to Tragedy in Chattanooga

You never think something like this will happen in your hometown. You watch news reports with horror and sadness when there is a mass shooting or another incomprehensible act of evil in some other city. You feel for the victims, the families, and those affected. But you don’t think it will happen to your community.

Yet, for the people of Chattanooga, Tennessee, it did. On Thursday, July 16, 2015 a gunman opened fire first outside a military recruitment center and then into the main building of the city’s U.S. Naval and Marine Reserve Center. Five members of the military died as a result of this heinous act of terror, and the city of Chattanooga was left to mourn the losses and sort out what had happened.

“As you can probably imagine, it was a pretty shocking time in the city,” says Steve Chardos ’70, a psychologist who serves as the president of the Notre Dame Club of Chattanooga. “It was in the neighborhood right near many of us. It was on the street that we drive on all the time. The place that we walk, ride our bikes, it was right next to where all the shootings happened.”

In the aftermath of the shootings, with the city still reeling, Notre Dame alumni and friends in the area decided they needed to do something to help. “We like to think of ourselves as a service club,” Chardos explains. He met his fellow club board members, and they brainstormed different ways to help. Karen McGrath ’04 finally made the best suggestion: What if they did something to aid those who were investigating the crime and working to keep the city safe?

Following the shooting, a number of law enforcement officials, from the FBI to the ATF, descended upon Chattanooga to team with the local police force. Hundreds of officers worked around the clock to ensure the safety of the city’s residents.

On the morning after the club’s board meeting, Chardos showed up at the city’s Police Services Center and asked how the club could help. The authorities, who spend their time serving others, weren’t used to having to ask for assistance. 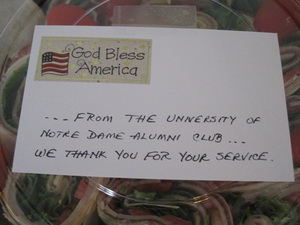 “They were hesitant,” Chardos remembers. “I guess they didn’t want to say, we need this, this, and this.” He realized he was going to have to find out what the authorities needed by drawing it out of them through suggestions. Eventually, he asked if they needed any extra food.

The police officers’ eyes lit up. They had lined up food for that day, but they didn’t have any coverage for the weekend. Chardos emailed the club’s entire membership, which includes 28 Notre Dame alumni and friends. The members responded immediately, offering to chip in money for the cause.

Later that day, Chardos and his wife purchased as many hero sandwiches and snacks as the $400 they had collected could buy. He then met up with the five other club members and delivered the food to the police center.

The police officers were very appreciative, but the club wasn’t satisfied. After some additional maneuvering to get the authorities over their reticence, the Notre Dame volunteers learned about one of the small challenges the authorities were facing. It was the middle of the summer in Chattanooga, and officers were stationed throughout the city for 8-hour shifts. Getting cold water to all of these officers was proving difficult.

On Monday morning, Chardos returned to the station, this time with his car packed with cases of bottled water. The club members had chipped in more money to keep the officers hydrated.

Chattanooga is a small club, but they are proud of their service work. Throughout the year, they hold a number of events, from working with homeless families twice a year to regularly teaming with the local chapter of Habitat for Humanity. The club’s response to the shooting wasn’t the most money they had ever raised for charity. It required less manpower than many of their previous projects. But it may have been the most meaningful.

“A number of people said this is the best thing our club had ever done,” Chardos says. “I’m glad that we represented Notre Dame in the community because the people at the police station, at the headquarters, when I went the second time, commented on the fact that we were from the University of Notre Dame.”