It started with his right foot.

Gus Raspitha ’70 Ph.D. was in his 70s but seemed younger. He was in good physical condition, loved to play golf, and had coached track for 20 years. He hadn’t shown any signs of slowing down.

But now he was having trouble lifting the front of his foot, and it was causing him to trip. When the problem didn’t go away, he saw a doctor. It took a year of tests ruling out a host of other possible—and preferable—causes before he finally got the news. 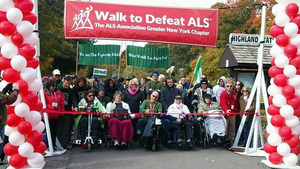 “It’s such a horrendous disease,” Ellen Raspitha says. “I don’t think I can underscore that enough. As soon as you hear those three letters, you’ve just been given a death sentence.”

Ellen watched her husband deteriorate, knowing there was nothing doctors could do to prevent the inevitable. Amyotrophic lateral sclerosis (ALS), sometimes referred to as Lou Gehrig’s disease, is a progressive neurological disease in which the nerve cells controlling voluntary muscles stop functioning. There is no cure. On May 11, 2009, Gus Raspitha passed away.

It was and continues to be a devastating loss for Ellen and their two children, Elena ’00 and Leo. Gus’ death also affected his larger Notre Dame family. But more than six years later, something beautiful has grown out of his tragic passing, and it continues to benefit patients who are struggling with the same horrendous affliction.

A key figure in making this a reality is Les McCarthy, who became friends with Gus through the Notre Dame Club of Mid-Hudson Valley in New York. Gus was a longtime member, and McCarthy, a Cornell graduate who grew up a Notre Dame fan and sent both of his children to the school, served as the club’s president for five years. McCarthy had already lost two close friends to ALS when Gus was diagnosed. Shortly after Gus’ passing, he approached Ellen with an idea: the club should hold an ALS walk in memory of Gus.

Ellen and her children were hesitant at first. “Gus was kind of a quiet, private fellow,” she says. “I think if they had asked when he was alive, he probably would have said no. But we thought, well, this could be part of his legacy. And, of course, Gus loved Notre Dame.”

On Nov. 15, 2009, six months after Gus’ passing, 55 club members and friends gathered at the Walkway over the Hudson, a 1.28-mile-long pedestrian bridge over the Hudson River that opened that year connecting the cities of Poughkeepsie and Highland. Carrying a banner with Gus’ name on it, the group walked across the bridge and then turned around and walked back to the other side. The event raised just under $5,000. When McCarthy mailed the check to the ALS Association Greater New York Chapter, he included a note that read, “We’ll see where this takes us.” 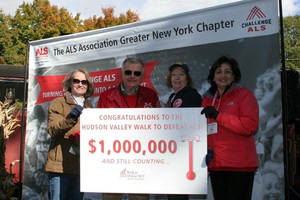 Before long, the club started planning for the following year’s walk. Ellen credits McCarthy with constantly looking to grow its impact. “He’s kind of like the Energizer bunny,” she says. “There is no stopping him.” They set a goal of raising $15,000 in 2010. When the walk arrived that fall, more than 600 walkers participated, and they raised an eye-opening $50,000.

The club was thrilled with the progress they had made in just two years. Still, they dreamed bigger. “It became obvious to me after our 2010 walk that this is about as far as, with our resources, we can take this thing without a partnership,” McCarthy says. The club leadership enlisted the help of the ALS Association Greater New York Chapter, and in 2011 the organization went from being merely the recipient of the funds generated to an official partner in the effort. This was a crucial development, as McCarthy, club president Linda Leagault Quinn ’84, and the other club organizers now, through this partnership, were able to reach out to the association’s contacts throughout the Hudson Valley.

In the four years since, the Hudson Valley Walk to Defeat ALS has grown exponentially. This fall, as roughly 2,000 walkers assembled at the same site where those 55 Notre Dame alumni and friends first gathered six years earlier, they celebrated a major milestone: The walk has now raised more than $1 million in the fight against ALS since 2009.

In the process, ALS patients living in the Hudson Valley have benefitted greatly. Before the walk, area patients had to travel roughly two hours south to New York City or roughly two hours north to Albany to receive specialized services. “There really was nothing before the club got involved,” says Dorine Gordon, the president and CEO of the ALS Association Greater New York Chapter.

The Notre Dame Club of Mid-Hudson Valley has changed that. “We were able to establish a regional care team of a nurse and a social worker in that area only because of the funds generated from this walk and this effort,” Gordon explains. These two full-time employees now make house calls to the roughly 100 ALS patients in the area. The funds also have allowed local patients access to medical equipment, and support groups have been set up for patients and their families. All of these services are offered to patients free of charge.

“It’s one of these things that you start, and I sincerely believe the wind to your back is the Holy Spirit,” McCarthy says, looking back on the growth and success of the walk. “And it pushes you forward.”

While the walk continues to grow, it hasn’t strayed from its roots. Each fall, when the Notre Dame Club of Mid-Hudson Valley members and their families and friends gather together, they still walk in honor of Gus.

“When I see that banner come out … it’s very emotional,” Ellen Raspitha says. “It really is. It’s hard to start the walk with a dry eye, even after seven walks.”

Ellen continues to serve on the board of the Notre Dame Club of Mid-Hudson Valley. She hopes that someday a cure for ALS will be identified. In the meantime, she is proud of what the club has accomplished in her husband’s name. And she suspects someone else would feel the same way.

“I do think Gus would be pleased,” she says. “I think that he’s smiling in his quiet way.” 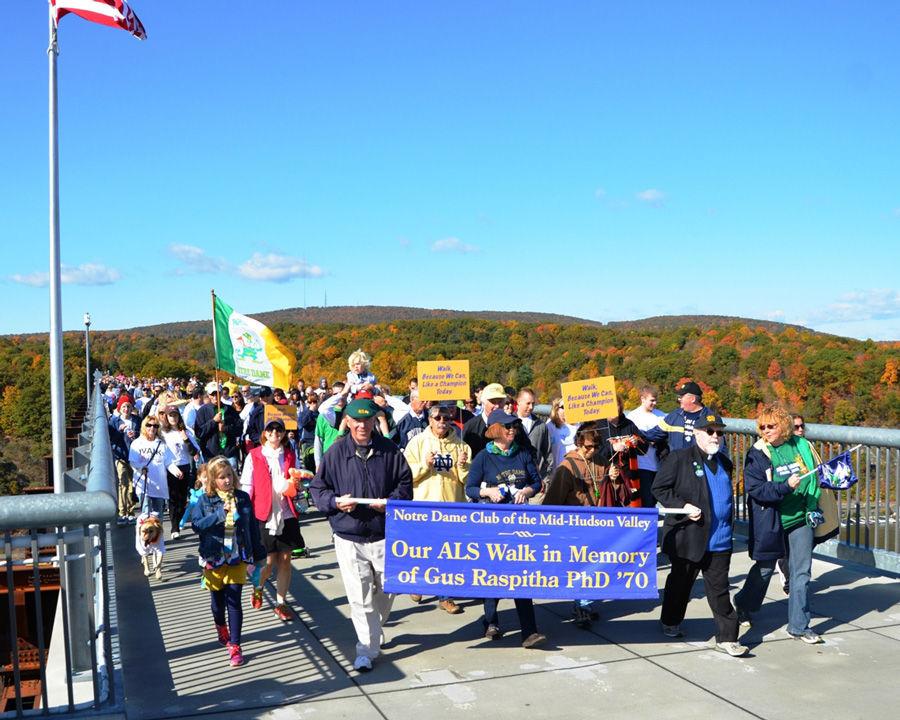